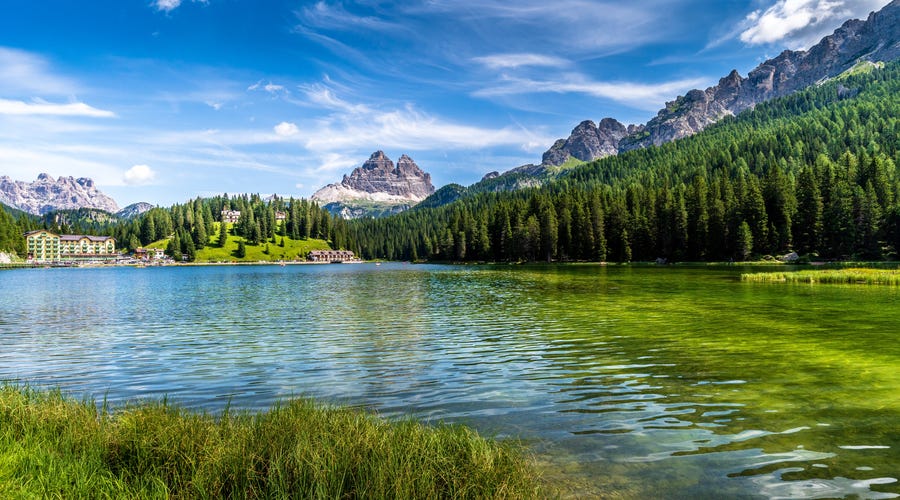 129 geography words in German to spark your wanderlust

Germany, Austria and Switzerland all have scenic landscapes to offer, including countless breathtaking lakes and impressive mountain chains - from the beachy coastline of the North Sea to the snowy mountain tops of the Alps.

There’s so much beauty in nature, which makes it a great topic to talk about when you’re learning German. It includes fascinating landscape features including different bodies of water and landforms that will never let you run out of things to talk about in German.

Learning about geography in German can also help you:

How do you say “landforms” and “water bodies” in German

We’ll teach you some of the most important geography terms, from rivers and oceans to hills and mountains in German.

“Landforms” in German are “Oberflächenformen” [ˈoːbɐˌflɛçn̩ˈfɔʁmən]. If you break down the word, it’s a lot less intimidating:

The German word for “Water bodies” is even simpler: Gewässer.

The most common landforms and bodies of water in German

When you’re learning the most commonly used landform terms in German, some of the categories may overlap, but we’ll do our best to keep it as logical as possible, starting with coastal and oceanic landforms.

Coastal and oceanic landforms in German

Austria and Switzerland are landlocked countries but a long stretch of Northern Germany borders on the Baltic Sea and the North Sea. You may not typically think of Germany as a country with many beaches but the reality looks very different!

You can find a long shoreline and countless beautiful beachy islands in Germany like Föhr, Sylt and Rügen.

Erosion is the process that wears out earthen materials through wind and water. While this process often seems destructive, it’s brought us some of the most beautiful landscape features such as canyons, caves and fjords.

Fluvial landforms are shaped by running water. They dominate many of our landscapes, even those that seem arid today.

When a large object hits the earth, this of course impacts its surface. 15 Million years ago for example, an asteroid hit the earth where Bavaria is today and the result is a huge crate called the “Nördlinger Ries” that is still very visible today.

Mountains and glacial landforms in German

Austria, Switzerland and the South of Germany are highly mountainous as Europe’s highest and most extensive mountain range, the Alps, stretches through all three countries. This gives these countries their distinctive look that brings to mind charming little mountain towns, surrounded by the beautiful snowy Alps.

Did you know there were more than 30 volcanoes in Germany? Don’t worry about them when you’re visiting though. The last one erupted around 11,000 years ago!

Bodies of water in German

These terms are especially important because they describe most of the wonders we have on our little blue planet as an impressive 71% of the Earth's surface is water-covered.

Phrases or idioms that contain landforms in German

If someone mentions a “silence in the forest” in German (Schweigen im Walde), they’re referring to an awkward silence.

To save you from any of those awkward silences in the forest, we’ll make sure you never run out of things to say in German. That’s why we always teach you plenty of idioms that you can use in a conversation.

If you ever get to travel to a German-speaking country, you can look forward to some impressive natural landmarks.

Southern Germany, Austria and Switzerland are filled with forested hills and some larger mountains like the Alps. In the North, Germany flattens out all the way to the North Sea and the Baltic Sea, which offer lovely sandy beaches.

These are some of the scenic highlights that these countries have to offer:

Despite its name, the Black Forest is a lush green woodland area with an abundance of wildlife and wild plants. What makes it so special is how pure and wild it is: Some areas have been purposefully left untouched by humans for more than 100 years.

This makes it the ideal habitat for a number of rare and endangered birds like the fastest bird in the world, the peregrine falcon, and Europe’s smallest owl, the pygmy owl.

The Styrian Volcanic Land in Austria gets its name from the remains of volcanoes that are millions of years old and still visible as hills in the region. Today, the area is a popular wine-growing area, so make sure you also try a local German wine when you’re there!

Germany has a number of so-called “Ostseebäder” (Baltic Sea Baths) like the Ostseebad Travemünde or Sellin on the island of Rügen. These little gems by the Baltic Sea are places with beautiful sandy beaches and a distinct beach culture.

Switzerland, Liechtenstein, Austria and Germany are all Alpine countries, so don’t forget your hiking boots when you’re visiting! If you love nature and especially the mountains, you won’t wanna miss out on this stunning mountain chain!

Lake Constance, the so-called “Bodensee” is where Germany, Austria and Switzerland meet. As Germany’s largest lake and the third biggest lake in Europe, it’s a popular tourist destination, with deep blue water and a scenic view of the Alps in the background.

Lake Geneva is on the French-Swiss border and offers fancy spa resorts as well as beautiful hiking trails through flowery patches of nature.

This lake is beautifully situated in Austria’s Salzkammergut region and surrounded by a number of little villages that could be straight from a storybook.

When you go to bed tonight, you’re probably dreaming of scenic landscapes and counting sheep-shaped clouds above the Alps before you fall asleep. Whether you’ve decided to visit the sandy beaches of the Ostsee or the sleepy towns in the Swiss Alps, your dream vacation is waiting - and the best way to prepare for a trip to a German-speaking country is with a German class of course.

There’s just no better way to experience a country than by chatting to the locals and getting all the insider tips that tourists miss out on. You’ll be fluent in no time because remember, with enough motivation and endurance, you can move mountains!

Whatever it is you want to talk to a German-speaker about, we’ve probably covered it in our extensive German language blog. So make sure to check it out and brush up on your German vocab before you hop on that plane!