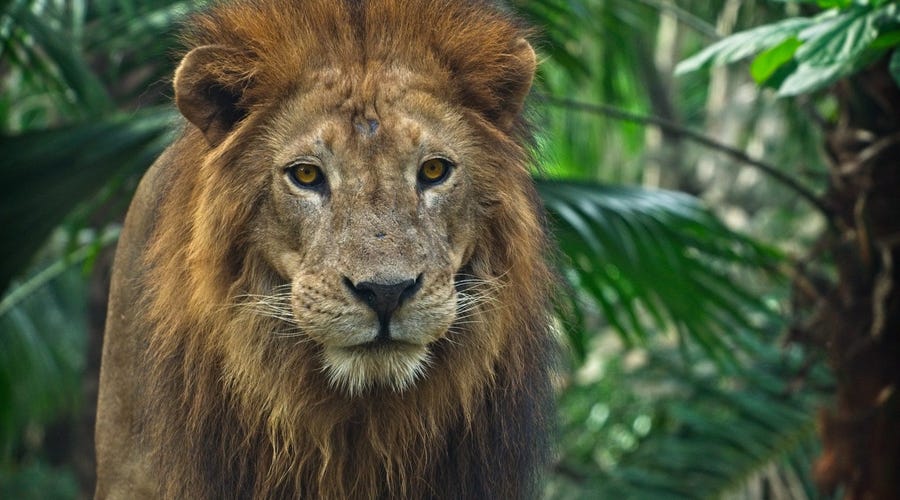 Learning all the animals in Spanish is one of the most exciting parts of every learner’s journey, and you can tackle it as soon as you’d like!

Animal lovers will be thrilled to find out that working on Spanish animal vocabulary is something that does not require much prior knowledge. You can start learning animal vocab as soon as you begin studying Spanish, and it’s also a great way to introduce the language to children.

Besides being very useful in day-to-day language, learning Spanish animal vocab can help you incorporate some fun activities into your language-learning toolkit. How about a trip to the zoo to identify all the animals in Spanish? Perhaps the aquarium too?

Once you’ve reviewed this guide, you’ll be ready to embark on exciting Spanish learning field trips. Who knows, you might even end up adopting a new pet!

You know that Old Macdonald had a farm, but did you know about your uncle’s farm? Yes, your uncle! The Spanish version of this popular nursery rhyme is called En la granja de mi tío which translates to “In my uncle’s farm.”

If you grew up singing along to Old Macdonald had a farm, you’ll be happy to learn that there is a Spanish equivalent with the same tune and the same concept. If you’ve already learned the lyrics to the English song, you’ll have an easy time singing along to the Spanish version—and learning a few farm animals along the way!

Check out the YouTube video below to listen to the song with lyrics:

Once you’ve sung along to En la Granja de Mi Tío a few times, you’ll be ready to dive into our comprehensive table of farm animals in Spanish.

Names of pets in Spanish

If you have any pets in the house, you might want to use them to practice your Spanish. No, really! They won’t understand English or Spanish anyways, so why not spell out your love to your pet en Español?

Your pet will appreciate the affection no matter the language, and you can use this time as a way to bond and also work on your Spanish vocab and pronunciation.

Bonus tip, Spanish speakers like to use diminutives to show affection. So instead of calling your dog perro, you can call him ¡perrito!. With the -ito suffix, you’re saying “little dog” instead of just “dog”.

Even if you’re the owner of a 200-pound English Mastiff, you can still call them perrito as a way to show endearment.

Here is a table with some of the most common pet animals in Spanish.

Now, memorizing zoo animals in Spanish can open the doors to many new study strategies. You could go on a field trip to the zoo and see if you can correctly recall all the zoo animal names in Spanish!

You can make flashcards in advance and bring them with you just to make sure that you’re getting the Spanish names right. Your zoo may also have Spanish translations on the exhibit plaque, especially if you live in an area with a significant Hispanic population.

Another thing you can do to work on your zoo animal vocab is watching Animal Planet in Spanish! If your cable package does not include Spanish channels, you can check out the Animal Planet Latinoamérica YouTube channel. They have plenty of free and entertaining wild animal videos in Spanish, like the one below.

If you liked the idea of going to the zoo, you could try the same strategy at the aquarium as well! Check out our table of the most common sea animals in Spanish.

If you’re a jungle fan, you’re probably looking to learn how to say monkey, snake, and toucan in Spanish. Check out our table below to learn all about jungle animals in Spanish.

Studying a new language can involve notebooks and flashcards—but it doesn’t have to. There are plenty of songs made for children and foreign language learners that will help you learn all the animals in no time.

Bingo is a popular song for both English and Spanish speakers. You know, B-I-N-G-O and Bingo was his name-o? Well, there is a Spanish version of this song! Check it out below.

Cinco Patitos is another popular song for children. You will learn vocab regarding ducks, birds in general, and even numbers.

If you’re looking for something a little more comprehensive, the video below is almost an hour long and includes several popular songs about animals. It’s a great option if you want to play it in the background while doing chores, like laundry or doing the dishes.

Besides helping you get through day-to-day conversations (and zoo trips!), learning Spanish animal vocab will help you understand many idioms. If you’ve been studying Spanish for a little while, you may have noticed that Spanish speakers love to use quotes, phrases, and sayings in casual conversation. Many of them have something to do with animals.

To understand the metaphor or point behind these phrases, your first step is to understand which animal they’re talking about. Once you’re familiar with the animal vocab above, you’ll be more comfortable understanding Spanish animal sayings.

Here are some famous sayings, along with their translation and meaning.

As you can see, there is a lot of Spanish animal vocabulary for you to learn. However, you should look at this as an exciting challenge rather than a time-consuming chore.

There are many fun and exciting study strategies that you can use to memorize the animals in Spanish in no time, to complement the rest of your Spanish language learning.