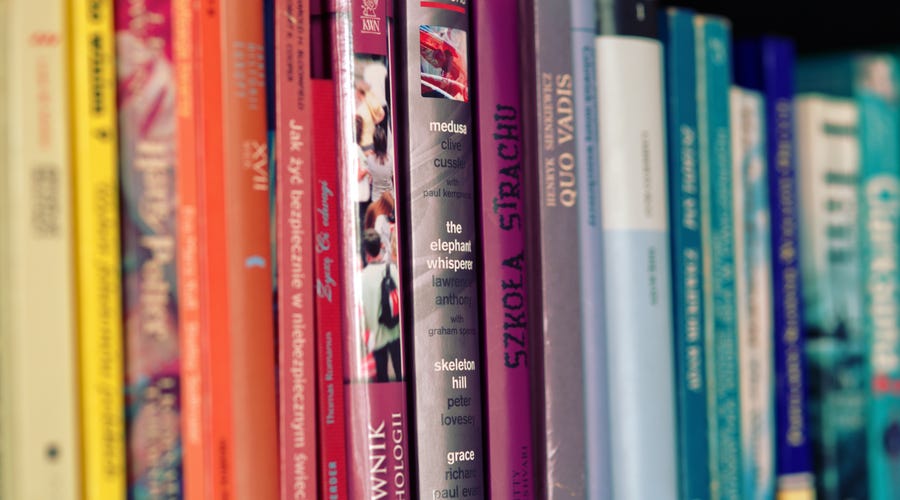 Colors beautifully demonstrate how speakers of different languages often see the world through different lenses. Did you know that other languages don’t always differentiate colors in the same way that English does?

In some languages, gray, black and blue are regarded as the same color - so there’s only one word for them, while in other languages, light blue and dark blue are seen as two distinguished colors. Yet other languages have an entirely different organizing system, for example, mapping brown, red, and green as one.

Getting to know the colors is an interesting and fun part of language learning. When learning and speaking German, it will make your conversations more vivid, more graphic and just more colorful, as adding colors to the things you say is like painting pictures while you speak. So we’ve collected all the colors of the rainbow for you, plus some extra pretty shades in between.

Why learn all the colors in German?

Being precise is imperative to communicating effectively and colors are often the most obvious attributes. So there is no better way of describing things. When you’re telling someone you lost an umbrella, it’s a broad statement.

If you’re telling someone “I lost my purple umbrella” (Ich habe meinen lila Regenschirm verloren), it immediately evokes a clear picture for them, and they will be able to help you find it.

When you’re trying to point out a single person in a group, you will often say something like “the girl in the green romper” or “the one with the turquoise tie,” and the other person will know exactly who you’re talking about.

Knowing the colors in German will come in handy when you’re trying to point something out without pointing fingers.

Colors are key to vivid storytelling. You don’t have to write a book to benefit from improving your storytelling skills. Good storytelling is great, even just for telling your friends what you did on the weekend or telling a funny little joke - and colors bring every story to life.

They’re the most simple and effective storytelling device. So adding in some color is an easy hack to seem like a pro when conversing in German!

Colors in German is “Farben” [ˈfaʁbm̩], and many of them are very close to the English ones. “Red” is “rot”, “blue” is “blau”, “orange” is “orange“. Others are different, like “schwarz” (black), “gelb” (yellow) or “lila” (purple), and you’ll just have to learn those as new vocabularies.

For all the specific shades of different colors, German borrows names from similar things as English does, like fruits, flowers, the sea, and the sky - and all the other colorful things we find in nature.

We’ve collected them all for you, from purple over orange, blue, red, yellow, brown, pink, and green to black and white. 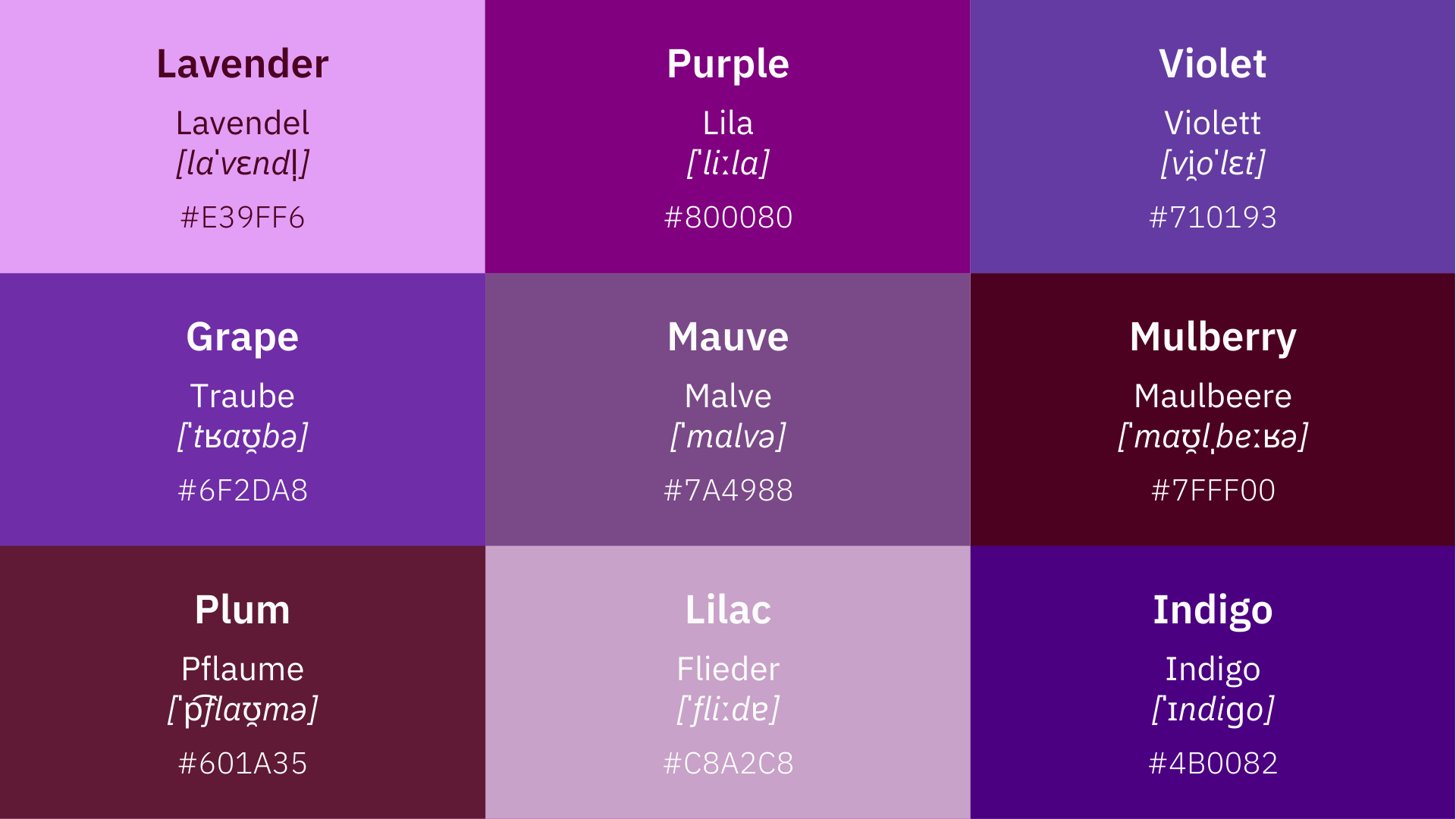 Purple in German is “lila” [ˈliːla]. The color might make you think of lavender fields or fresh fruit. Here is a whole bowl full of purple colors and fruits like plums and berries: 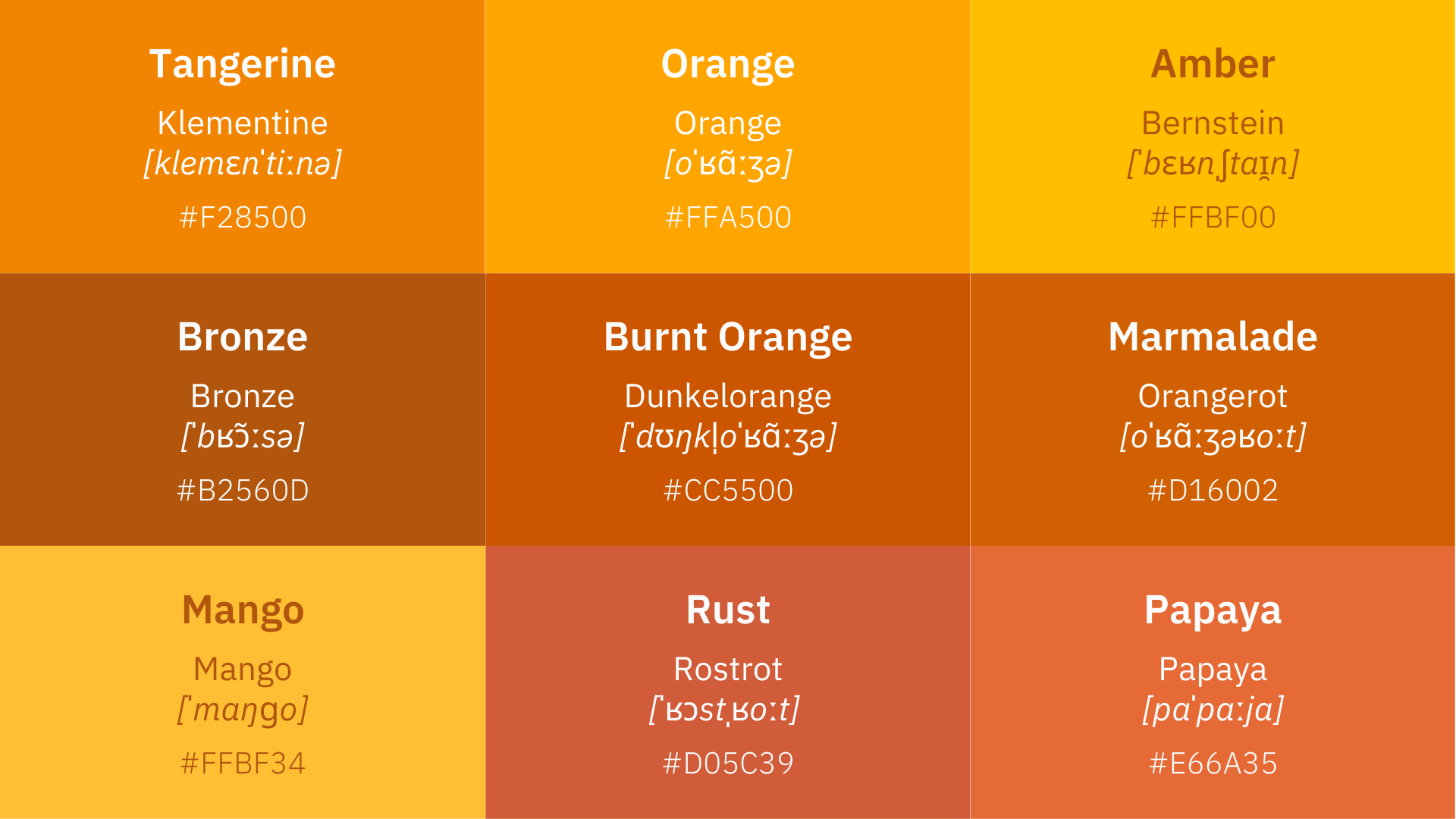 Orange in German is “orange” [oˈʁɑ̃ːʒ]. Like in English, it’s the same for the fruit and the color. Tangerines are very popular fruits in Germany during the winter months as that’s their peak season there and bronze might make you think of German Weihnachtsschmuck (Christmas decoration) - so it’s a pretty wintry category. 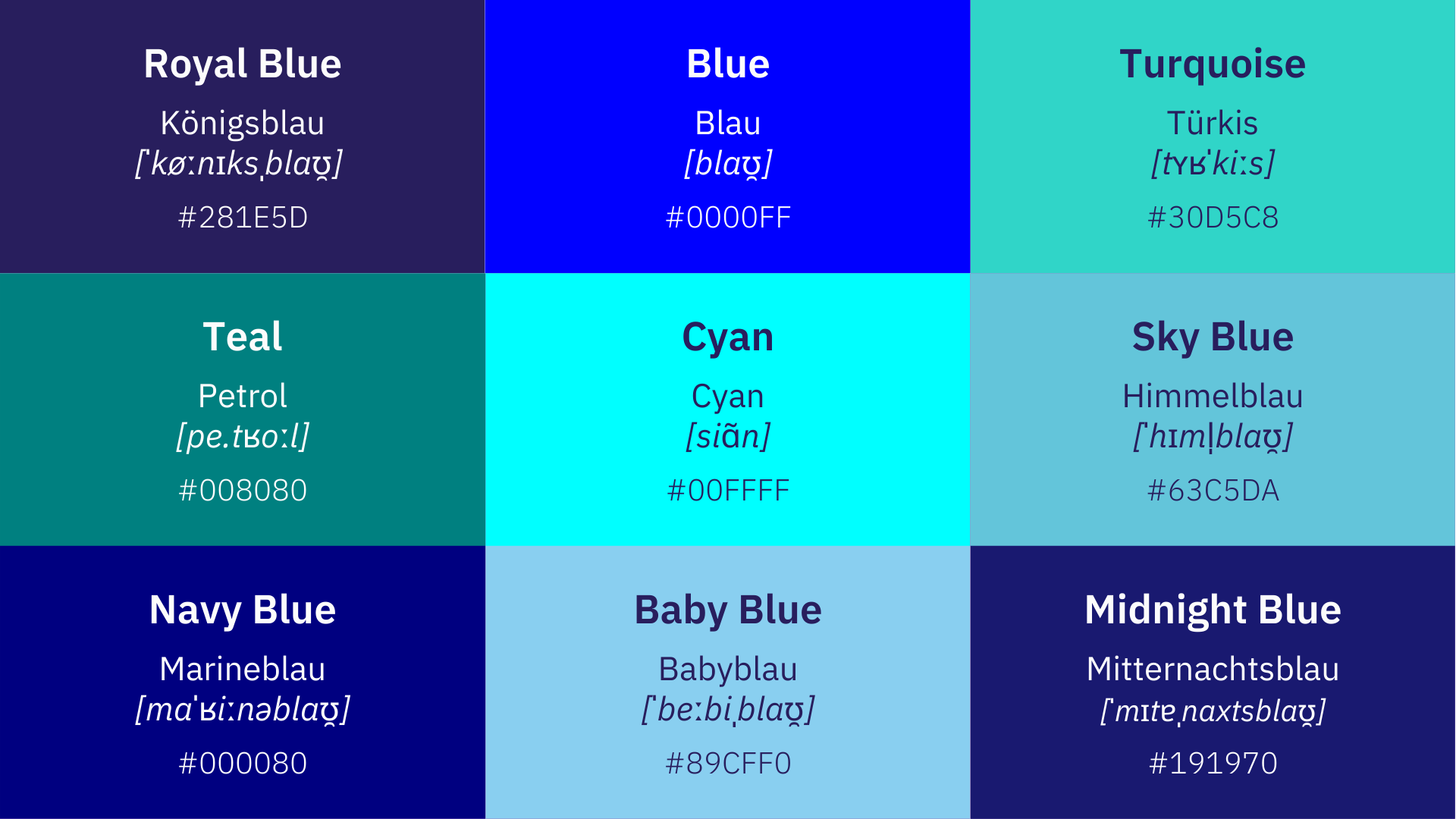 Germany actually has some beautiful beaches! The water here may not always have the cyan or turquoise colors it does on tropical islands, but they’re charming, too: from babyblau (baby blue) to königsblau (royal blue). Blue in German is “blau” [blaʊ̯] and there are many variations of it: 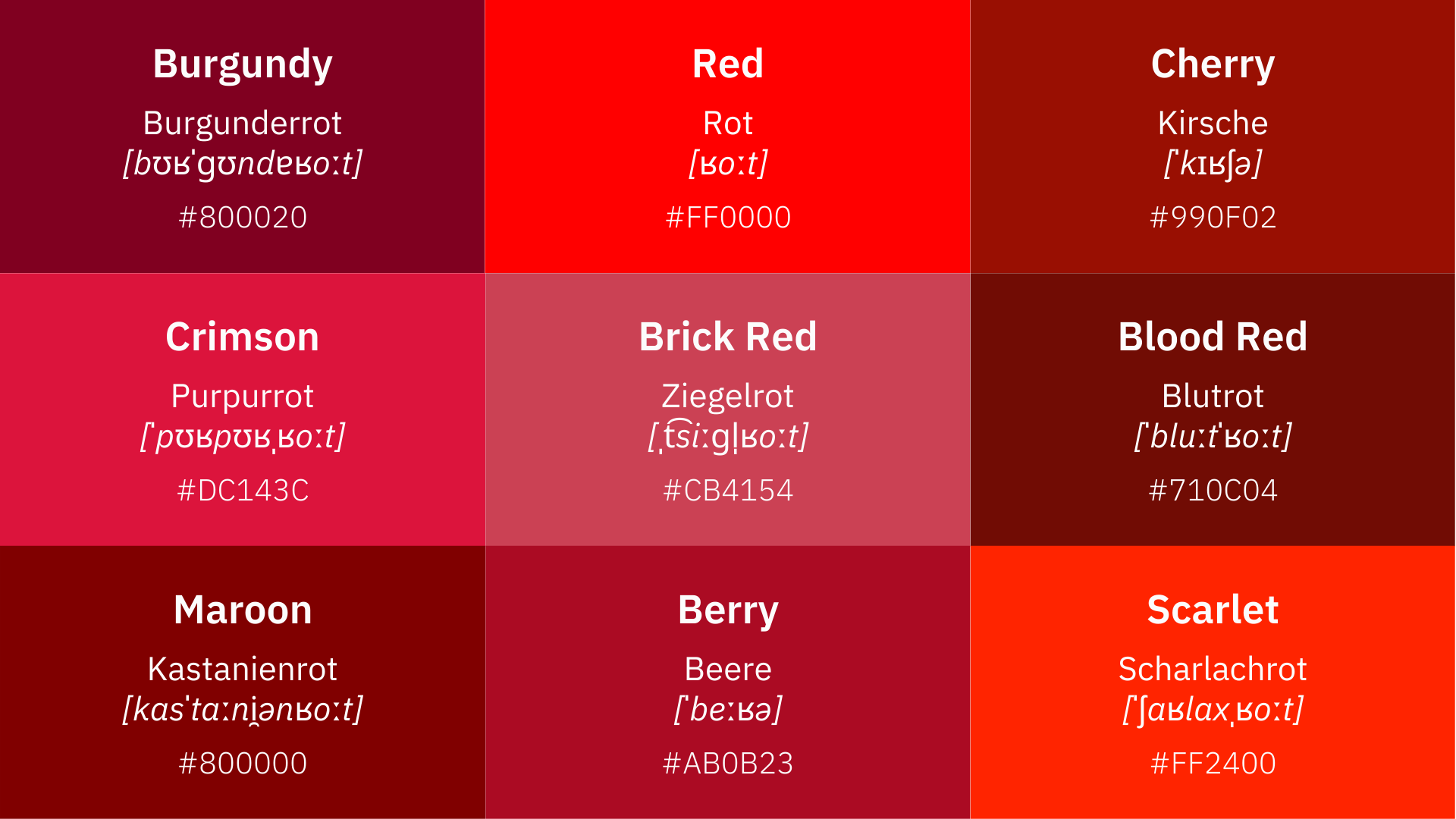 Across the board, red is a warning color - the color of blood, poisonous animals and the traffic lights you don’t want to miss. Red in German is “rot” [ʁoːt]. Remember it well. It’s kind of an important one. 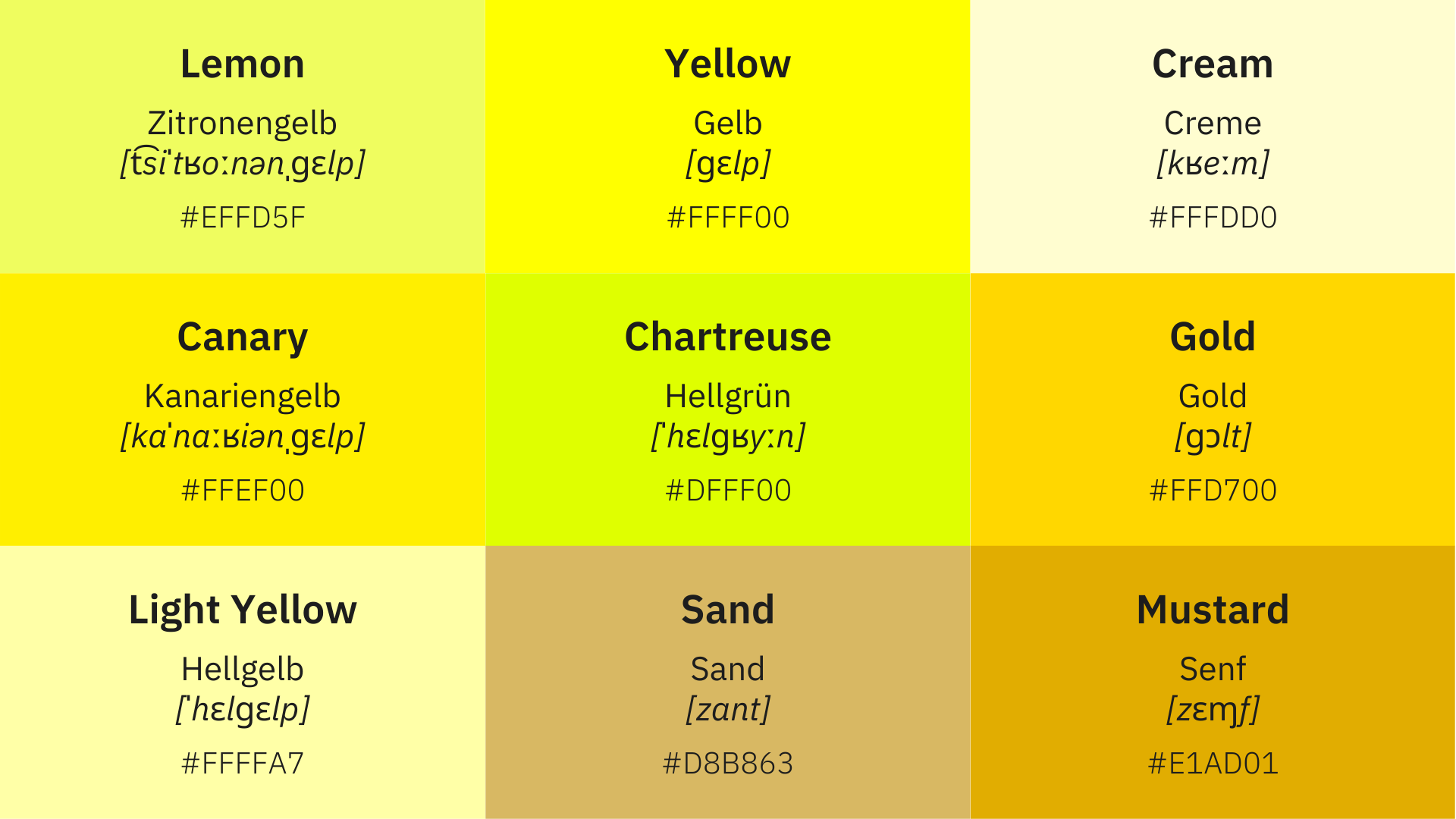 Lemons, bees and sandy beaches - definitely a summer color! Yellow in German is “gelb” [ɡɛlp], and it’s as sunny as a pocketful of sunshine: 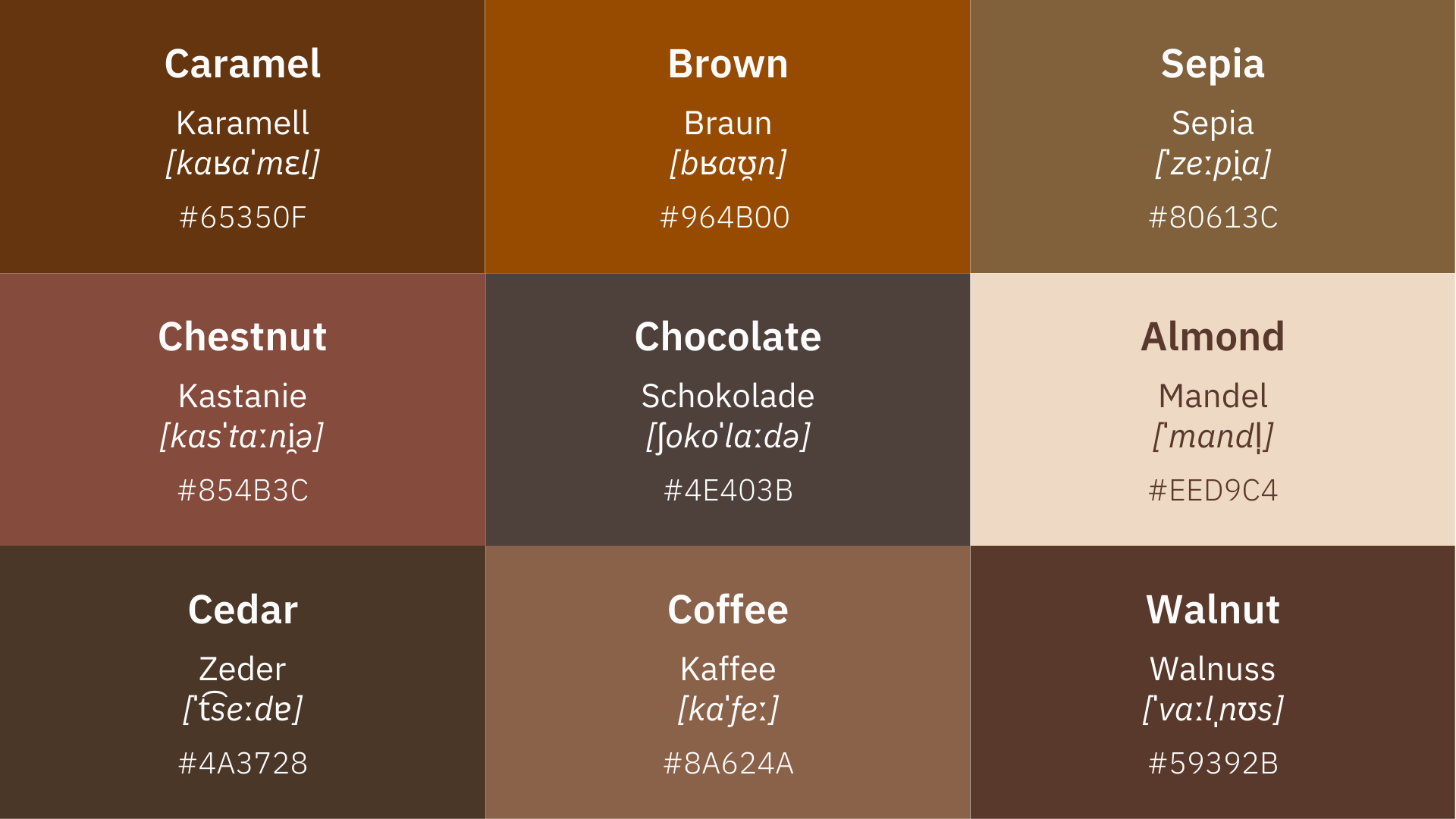 Here’s an earthy color that might make you think of coffee or nuts: Brown in German is “braun” [bʁaʊ̯n], and it can be as delicious as German caramel candies. 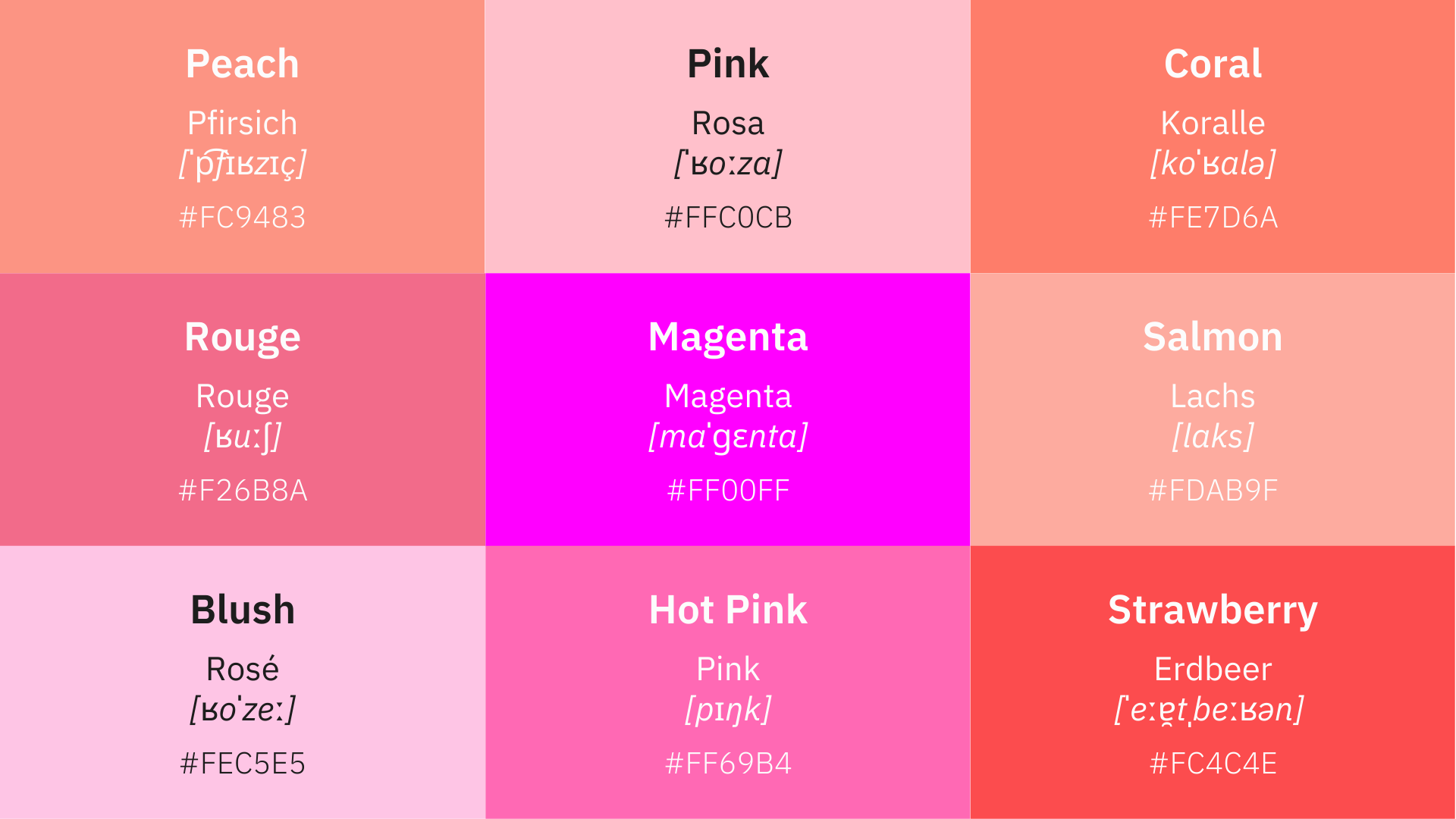 The interesting thing about “pink” is that the word is used in German, too, but it describes what English-speakers might call “hot pink” or “shocking pink.” The regular pink in German is “rosa” [ˈʁoːza]. 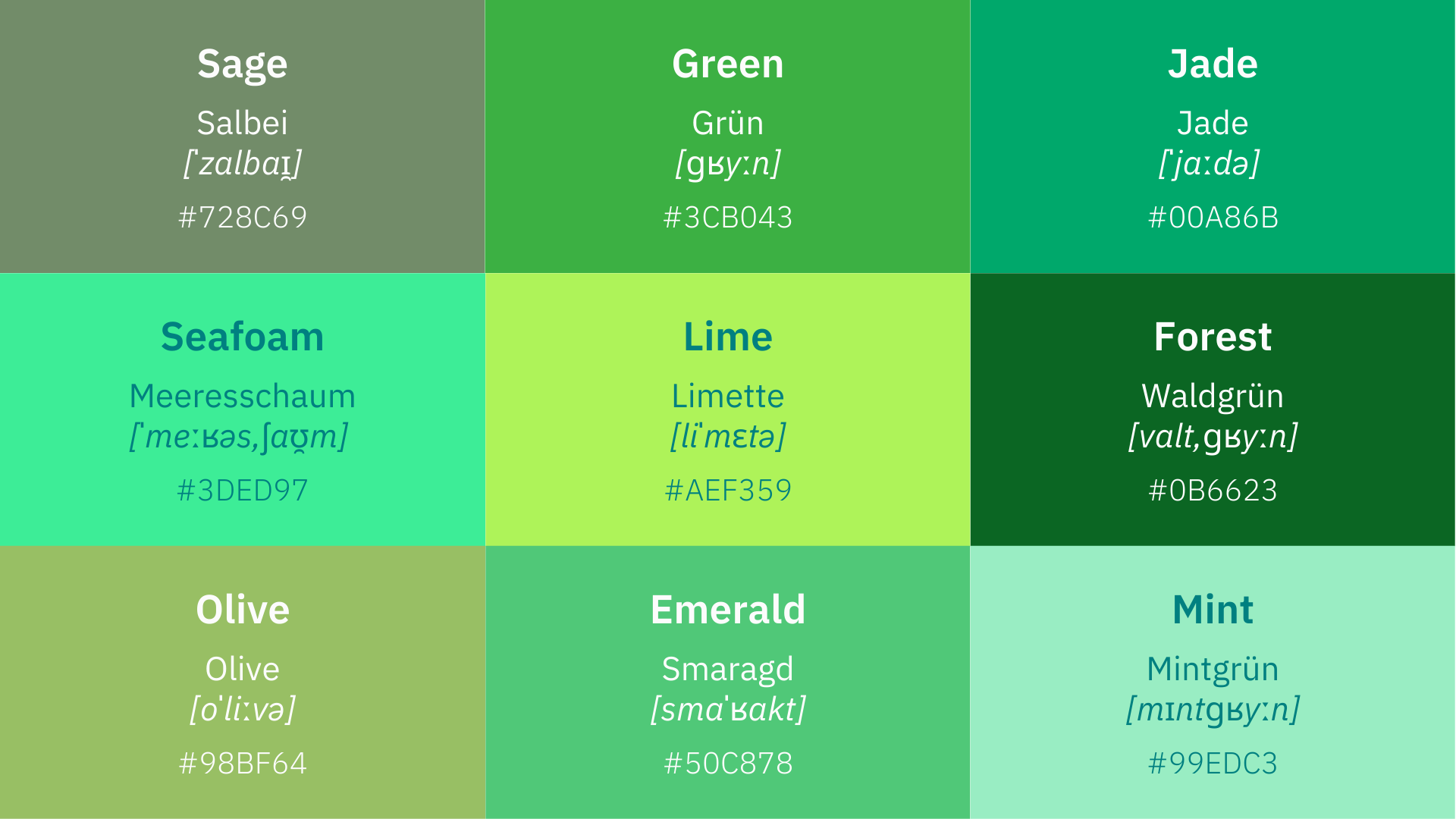 Germany is a very green country. It has a political party dedicated to green matters such as environmentalism and stopping climate change, which actually has the third-largest parliamentary group in the German Bundestag! Green in German is “grün” [ɡʁyːn] and the party is simply known as “Die Grünen” (the green ones). 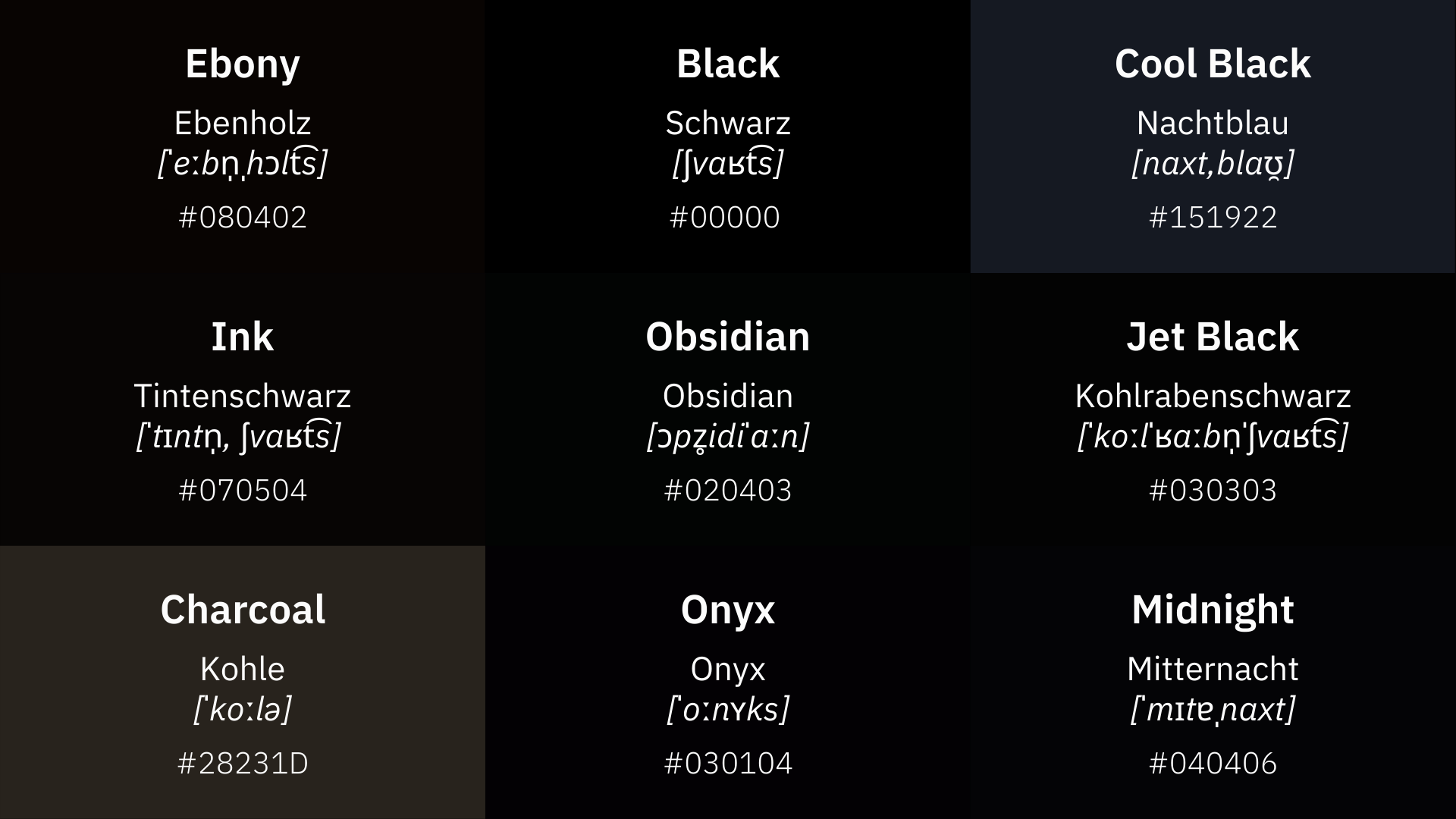 Black in German is “schwarz” [ʃvaʁt͡s]. It can describe pitch-black things like tar and ink but sometimes the lines between black and blue also blurr, as they do with “cool black”, which would be described as “nachtblau” (nightblue) in German. 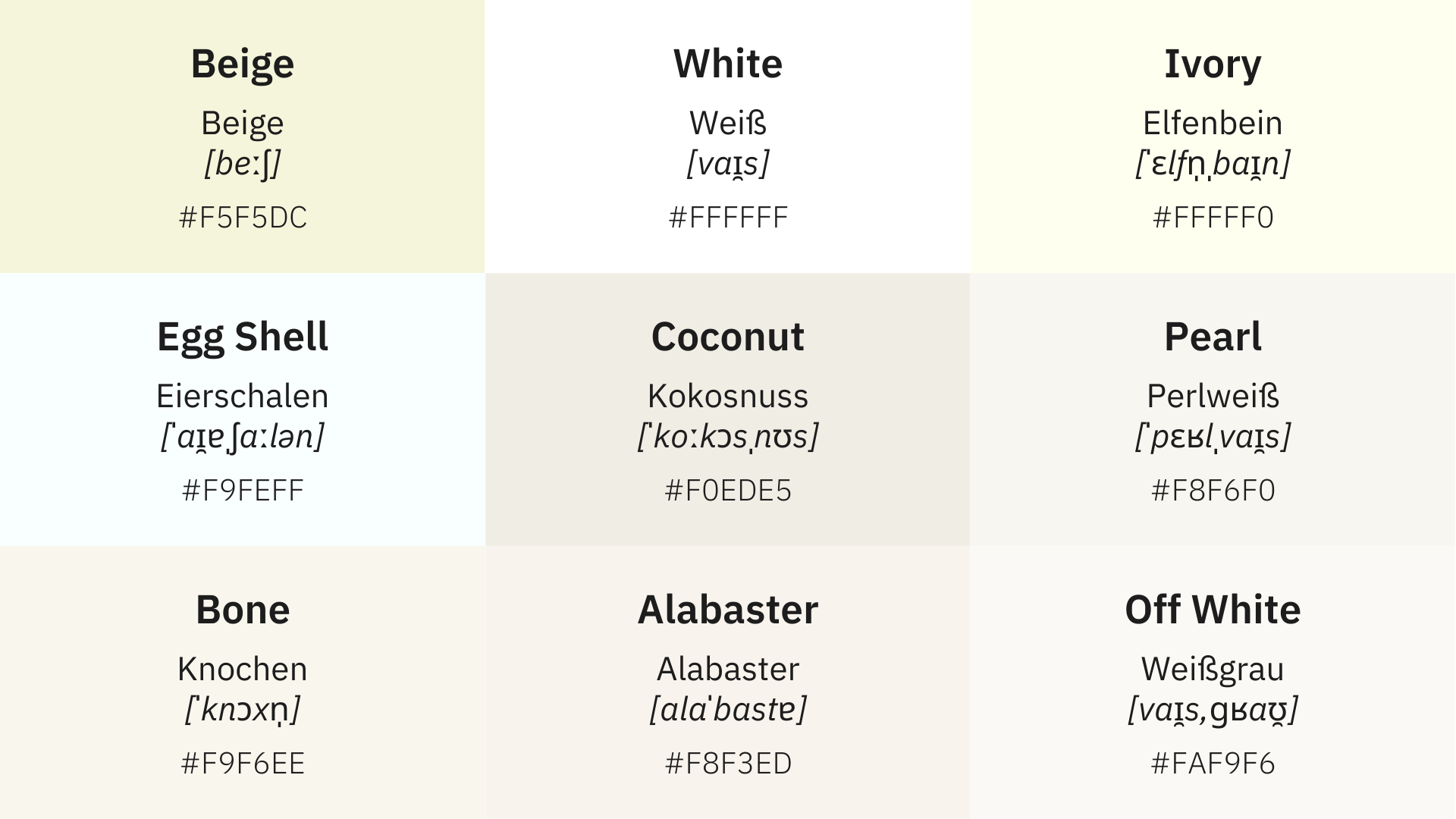 Germany is known for its bureaucracy, so after black, lastly, we also need to mention that white in German is “weiß” [vaɪ̯s] and Germans sometimes tend to want things “schwarz auf weiß” (black on white) - or nicely written down on a piece of paper, so to speak.

This fun paper chatterbox will help you learn German colors in no time! Our aim is to use both visualization and spelling techniques to help you remember the color names. Folding instructions are included on the pdf.

Songs about colors in German

Here is a children’s song that’s supposed to help you figure out your favorite color with some cute animation, all of which have a face, from the cherries to the moon. Which one is your favorite? Green as grass or pink as a piggy?

This one is a classic: The lyrics go “blue, blue, blue are all my clothes, blue blue blue is everything I have. I love everything that’s blue because my baby is a sailor” and follows this pattern with a number of colors.

So if you’re dating a chimney sweeper, be prepared to only wear black from now on. Might not make too much sense but it’s how a lot of German kids learn about the colors.

The duo Klan consists of two brothers from Saxony. In their song “Rot Blau Grün” (Red Blue Green), they sing about the heartache of a breakup and the fear of moving on and having to live as your own separate person, a whole falling back into its parts, like atoms or like colors that have been mixed and then separated again.

How do you say colorful in German?

There are a number of words for “colorful” in German, the most common one being “bunt”. You can also say “kunterbunt”, “farbenfreudig”, “farbenfroh” or “farbenprächtig”, all of them meaning something has many different colors, or if the colors are really shrill, you can also say “quietschbunt”, which means something is so colorful, it squeaks!

How do you use colors in a German sentence?

Colors are adjectives. So when they are used to describe a noun, they usually go right before the noun and they need the correct ending to go with that noun (blaues Haus). They can also be nominalized by adding an article to the color (das Blau) and stand alone that way.

What do the colors of the German flag mean?

The colors of the German flag were used during the wars of liberation against Napoleon when soldiers first wore them on their uniforms. They symbolized the blackness of bondage, from which the golden light of freedom was to be achieved through blood-red battles: from black over red to gold.

Colors are so memorable that it’s easy to make up little stories around them. If you’re trying to remember the word for Colors in German, it’s “Farben” [ˈfaʁbm̩], just like when something is far away, plus the name Ben.

So if you need a memory aid to remember the word, just picture someone called Ben, who is far from you, somewhere on the other side of the street, for example, but you can easily spot him because he’s wearing such a colorful jacket. You’ll think of the colors, and you’ll remember Far-Ben. You can try this with all the colors. Stories with colors tend to stick in our heads.

In Korean for example, there is only one word for blue and green, but Koreans use the sky and the leaves as reference points, so a Korean speaker will say the color and then add “like the sky” or “ like the leaves” to distinguish between those shades. The same works if you’re missing the German word for a precise color - You can just use the general color and then add an attribute of your choice for specification.

Make up your own colors

If you’re not sure how to say a color in German, you can always make up your own! Just come up with something resembling the color that you do know the word for and name the color after it, like an animal.

Once you’ve mastered the animals in German, you’ll have a wide range of vocabulary to choose from when naming a color. Just find an animal and add a “-farbig” (-colored) to the word: “Schweinfarbig” (pig-colored) could be pink. “Pinguinfarbig” (penguin-colored) could be black and white. Get creative.

German has multiple words for “colorful”, the most common one being “bunt”, but another one is “farbenfroh”, which literally translates as “colorhappy”. It’s happy with color, which is a beautiful expression because it entails the notion that adding color to something - a piece of art or a flower bed, adds happiness to it - and there’s definitely some truth to that.

So add some color to your language learning journey, and it will be a much happier one. There are a thousand shades of “bunt” to enrich your German!

If you loved this blog article lesson, discover more free and useful German vocabulary articles on our learning German blog.