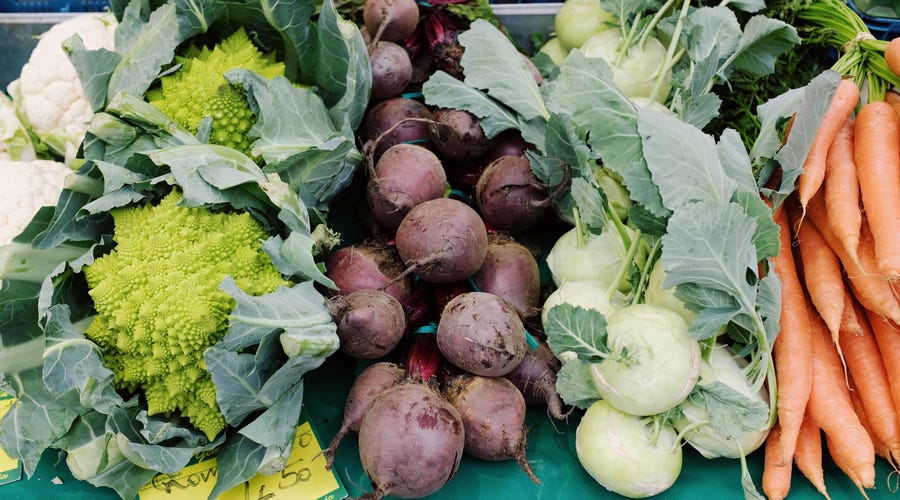 113 yummy vegetables in French to make your vocab more tasty

To take your French to the high standards of French cuisine, you’ll have to learn all about the vegetables in French.

French cuisine is world-renowned for its bread and cheeses, but fresh vegetables make up a huge part of the culinary scene in France. The popular dish ratatouille (no relation to animated rats!) is a colorful display of aubergine, courgette, tomate, and even more tasty veggies.

And what better way to add some flavor to your French experience than by learning all the vegetables? Of course, you could simply learn how to say vegetables and the names of a handful of veggies, but then your meals wouldn’t be nearly as flavorful. Plus, learning French is all about pushing your boundaries to become fully proficient in this beautiful language!

And even if you’re not a professional chef—or even a good cook—you can benefit greatly from learning how to talk about vegetables!

This handy guide will show you how to talk about any vegetable like a pro. With over a hundred different vegetables and their French translations, this list is sure to cover all your favorites. 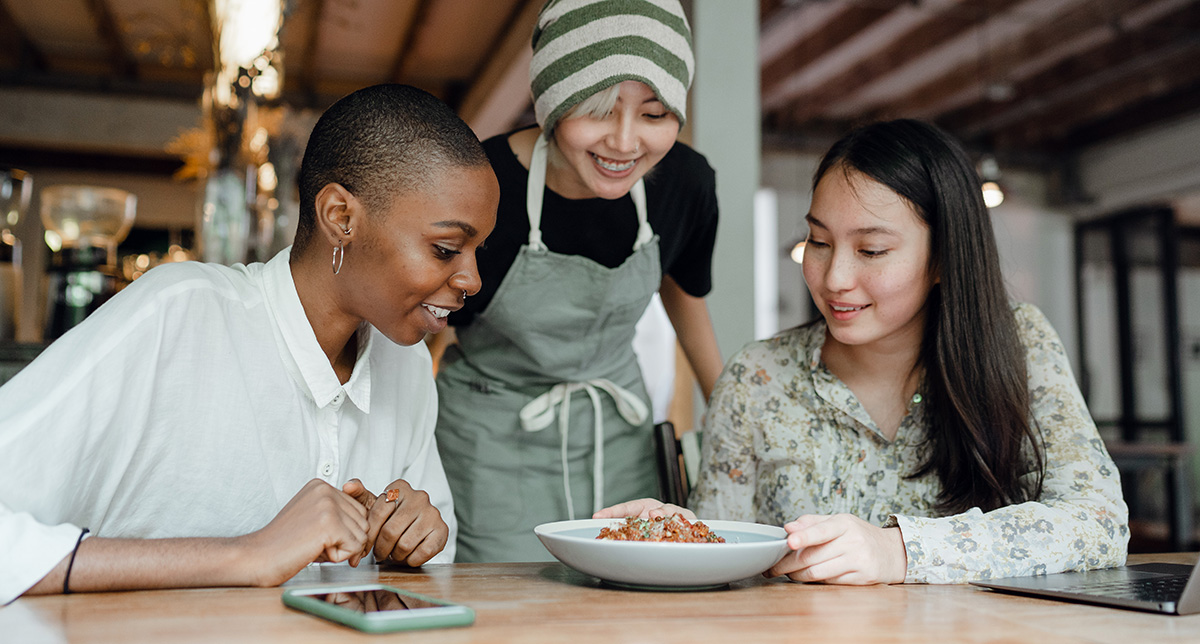 Print out this free and fun vegetables poster and stick it on your fridge. If you can memorize this list of some of the more popular vegetables in French, you'll be on your way to sounding like a local.

Why learn how to say vegetables in French

No matter where you are in the world, there’s likely at least one French restaurant nearby. French food is considered some of the best in the world and, for some reason, French restaurants seem adamant about listing every menu item in French, regardless of the local language.

Next time you visit a French restaurant, you’ll be able to decipher all the ingredients like a real pro. With over a hundred veggies under your belt, you’ll be more than capable of understanding each dish, as well as requesting any modifications you may need from the server.

Plus, being able to flawlessly read and pronounce a French menu can be a great way to impress a special someone. Next time you want to go on a date, you can suggest a great French restaurant to show off your lovely language skills. You could even practice some romantic expressions in French too!

What better way to learn how to cook French food than by learning directly from the locals? Once you’ve mastered all the veggies in this list, you’ll be able to cook some great new French recipes that you may or may not have heard of before.

Luckily, YouTube is full of fantastic (and free!) cooking videos from French chefs. Below is a video from 750g, a French cooking YouTube channel with hundreds of French-language cooking videos for you to practice your French (and cooking skills!).

If you’re a fan of shows like Master Chef or The Great British Bake Off, get ready for French cooking shows. Not only are they a ton of fun, but they are also great ways to learn French. People on these shows tend to describe what they are doing as they are doing it, which will help you develop your listening skills tremendously.

Here are some great shows to get you started:

Now, let’s get into the potatoes of this article: how to say vegetables in French. But first, let’s discuss how to actually say vegetables.

But that’s it! That’s really the trickiest part about learning vegetables for English speakers. With enough practice, you’ll train your brain to no longer associate légumes with legumes. Trust us!

Now it’s time for our comprehensive list of vegetables in French. We’ve broken them down into different types of vegetables (including legumes!) to make it easier to digest.

We’ve included over 100 different veggies, which may seem a lot, but we just couldn’t narrow it down! Vegetables come in all shapes, sizes, and colors, so learning all these vegetables will drastically improve your vocabulary.

Root vegetables are incredibly popular in French cooking. French stews tend to be very thick, and they’re usually made with lots of carrots and celery. So if you want to learn all the légumes du marché (the vegetables in the market), you’ll have to start with learning how to say carrot in French. 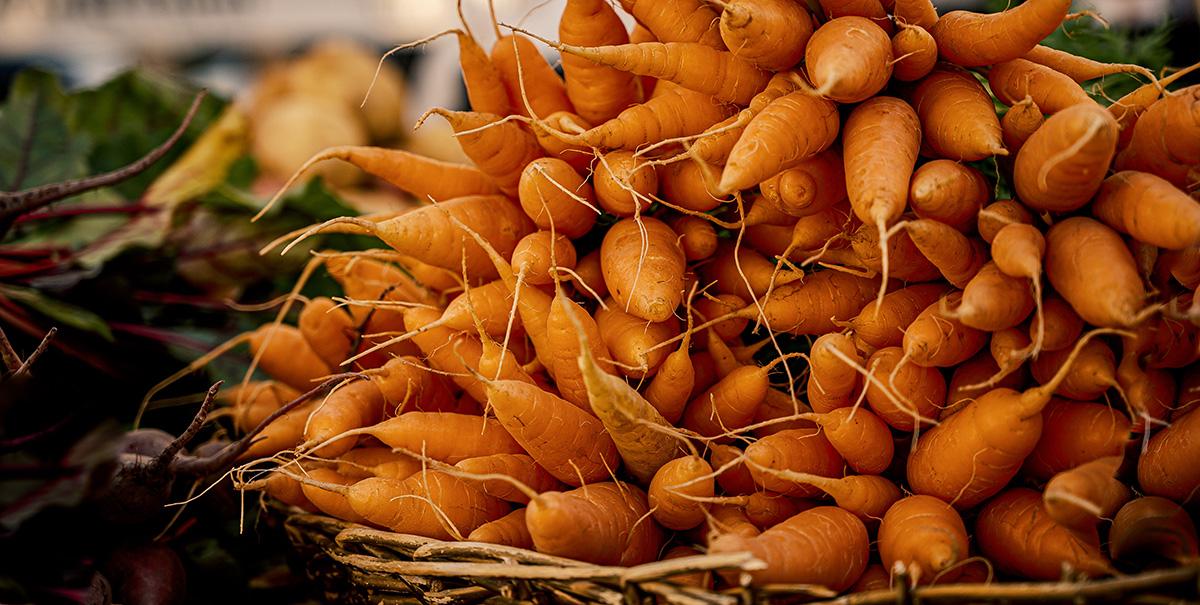 Indeed, potatoes are the favorite vegetable of French people. Who knew the land of the French fries (they’re actually from Belgium, but that’s a different story) would be full of potato enthusiasts. 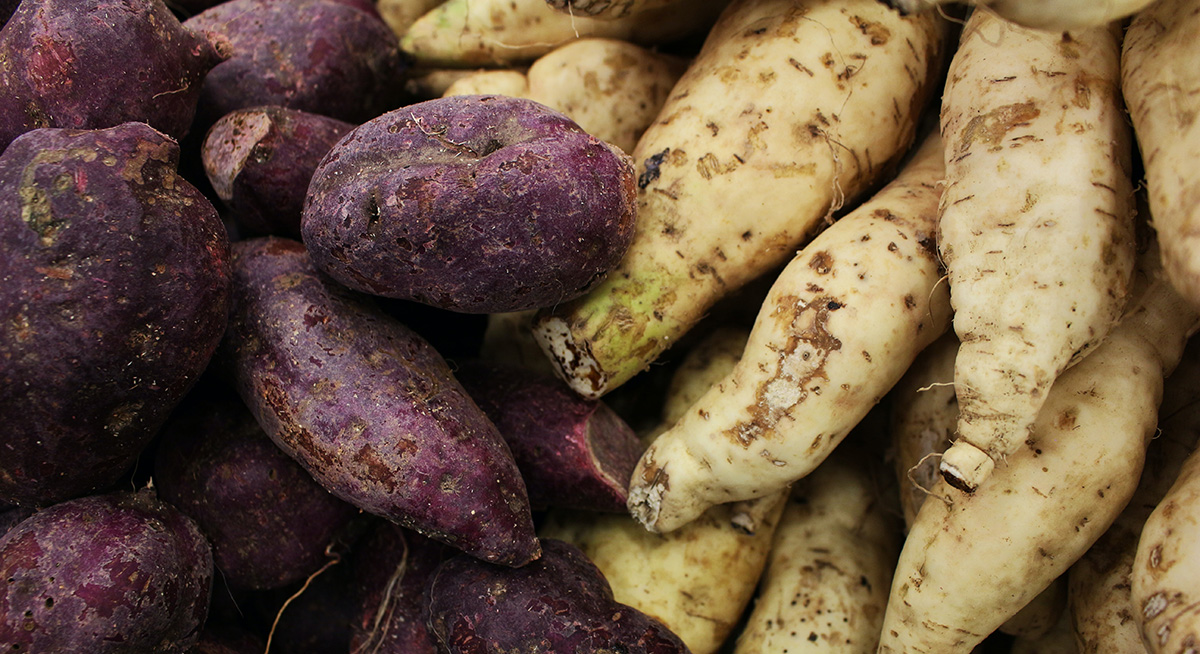 What better way to start a dish than by sautéing some onion and garlic? Bulb vegetables are essential parts to every meal, as little veggies like chives and scallions can really help give your dish a spicy kick that’ll bring out all the other flavors.

Stems and shoots in French

Sometimes, we avoid eating the stems off of leafy greens. Other times, the stems are the main attraction. Veggies like asparagus, celery, and hearts of palm can be the star of the show in many dishes, whereas others like rhubarb and lemongrass can be a more subtle complement to complex flavors. 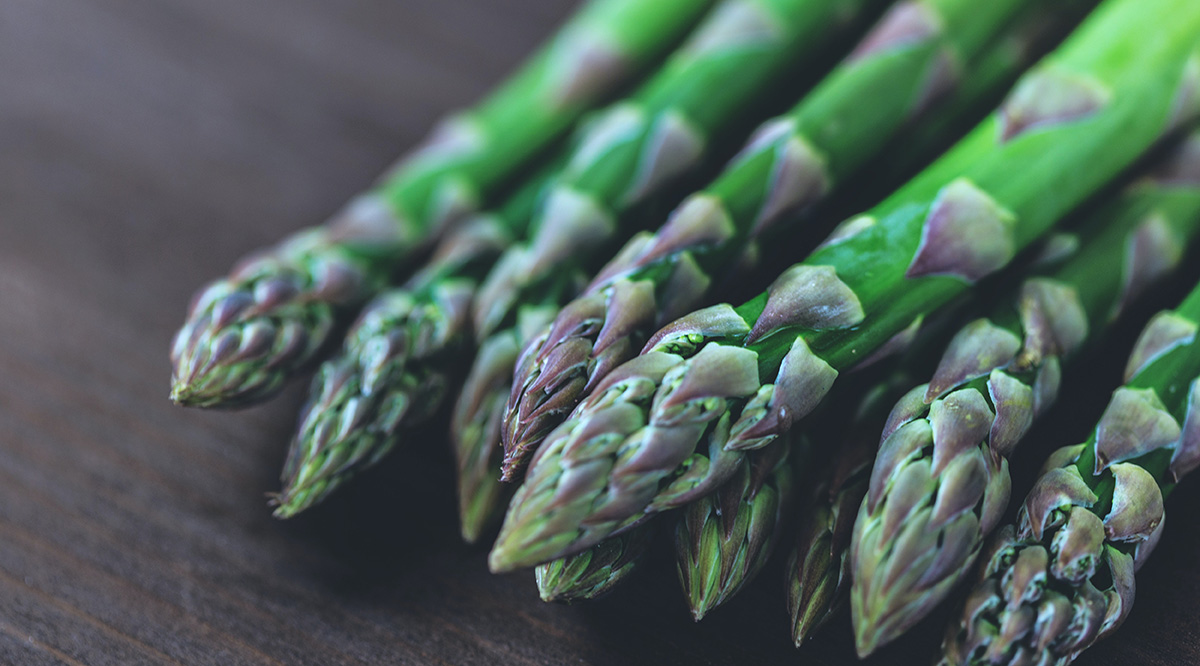 Flower vegetables are the gift that keeps on giving. Just ask cauliflower, who has had a very busy couple of years. From being rice, to pizza crust, to even pasta, cauliflower has mastered the art of shape-shifting. Simply by learning how to say cauliflower in French, you’ll be able to expertly navigate any vegan restaurant menu in France.

Fungi and mushrooms in French

Mushroom culture in France is unlike anywhere else in the world. Just like Americans like to go fishing, the French like to go picking mushrooms. Mushroom foraging is something that many children and adults enjoy doing in their spare time.

If you enjoy mushrooms and want to learn more, there’s even a mushroom museum in western France. And if you’d like something even more hands-on, you can visit Espace Rambouillet, a popular park for mushroom foraging near the outskirts of Paris. 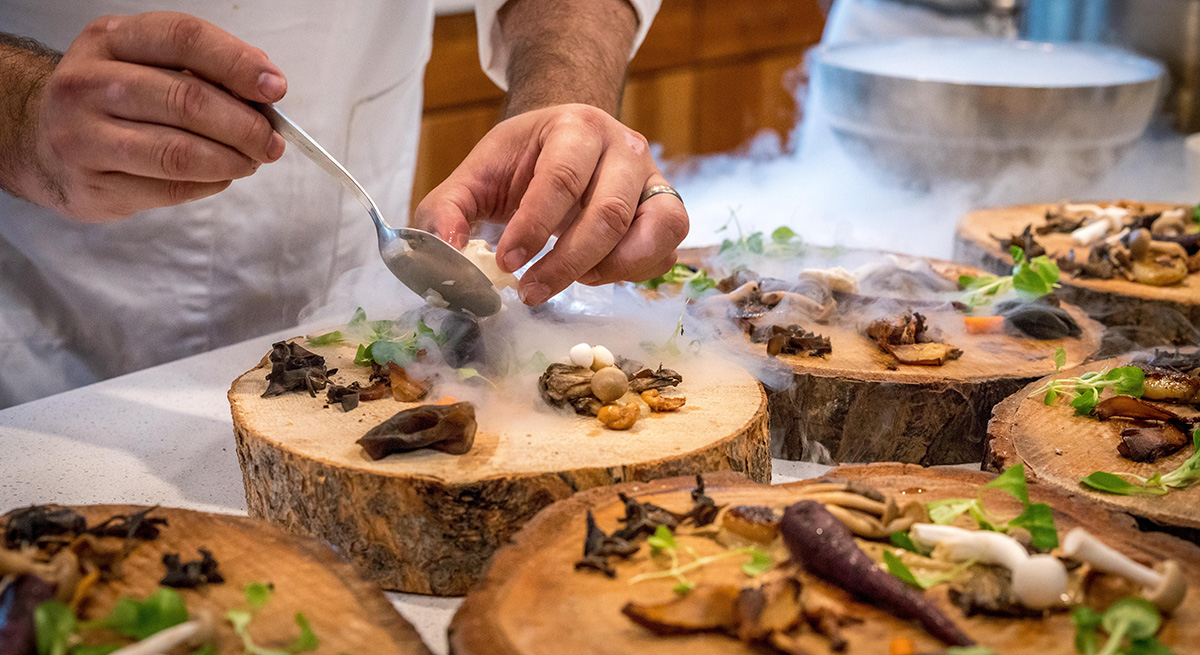 This section will be interesting for any English speaker. The French word for lettuce is something you’re already familiar with: la salade. So, then, how do you say salad in French, you may ask? Also la salade. Simple, right?

If you want to be very specific, there is another word for lettuce that you can use: la laitue (la leh-too). However, la salade is much more common in everyday conversation.

We’re all guilty of grouping some of these fruits with vegetables. Even though they like to hang out with the veggies, these impostor vegetables were actually fruits all along.

Regardless, they’ve earned a spot in our list of vegetables because we all deserve to be whoever we want to be. 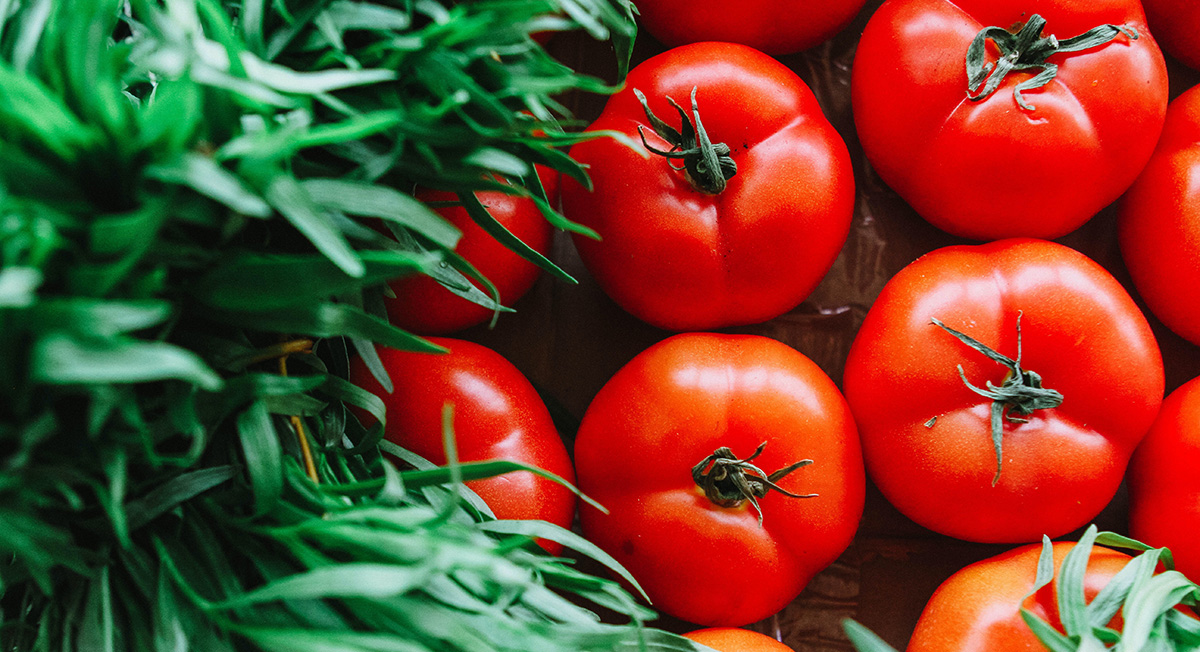 As previously discussed, legumes are légumineuses and vegetables are légumes. Now say it out loud! Say it three times!

The sooner you can drill this down, the sooner you will stop getting confused every time someone brings up vegetables and legumes in French. With enough practice, you’ll nail down the difference in no time! 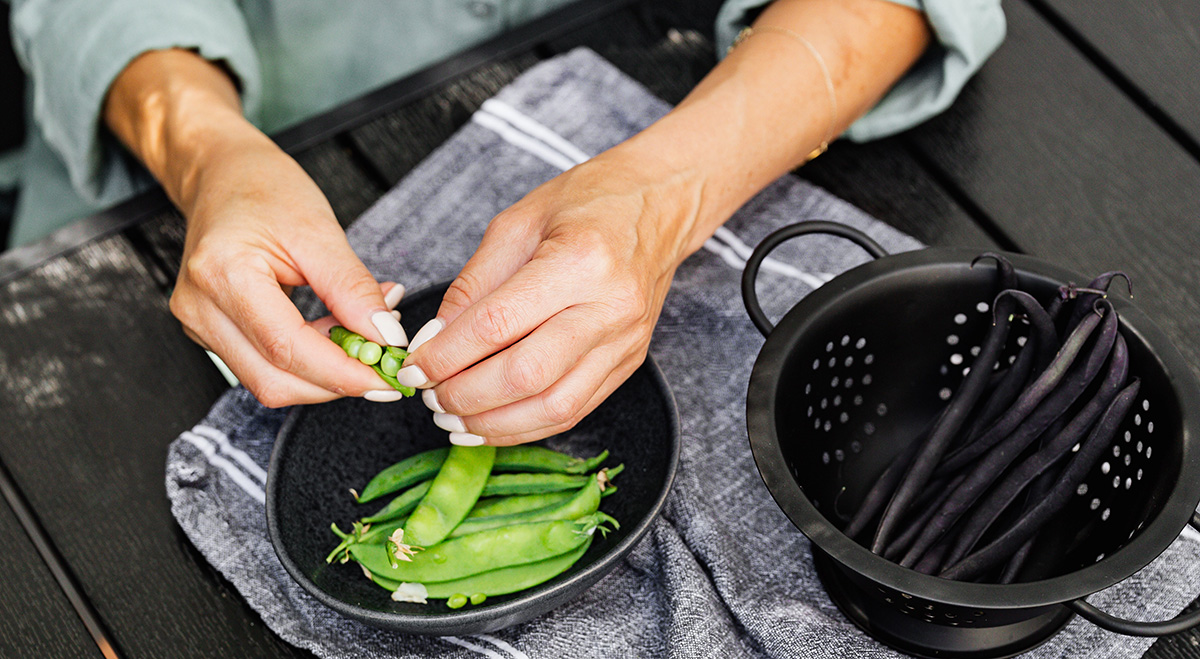 If you’re a fan of sushi and Japanese cuisine as a whole, you’ll want to get acquainted with the sea veggies in French. Next time you find yourself in a French-speaking region, you’ll be able to get your sushi fix with ease once you know the sea vegetables. 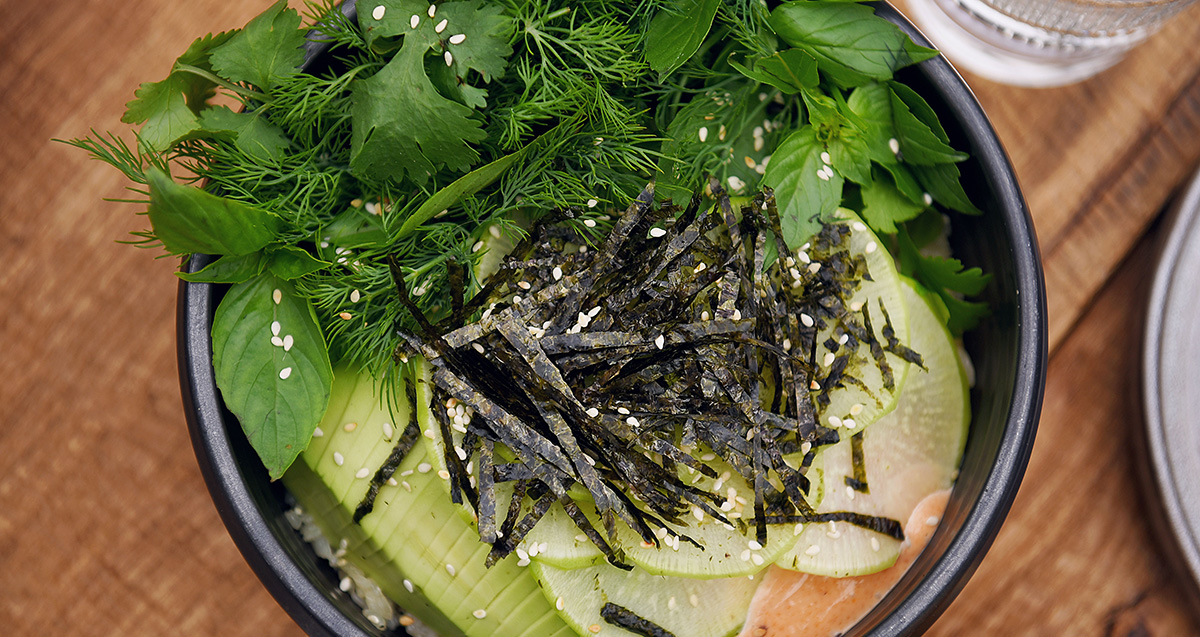 Tips for memorizing the vegetables in French 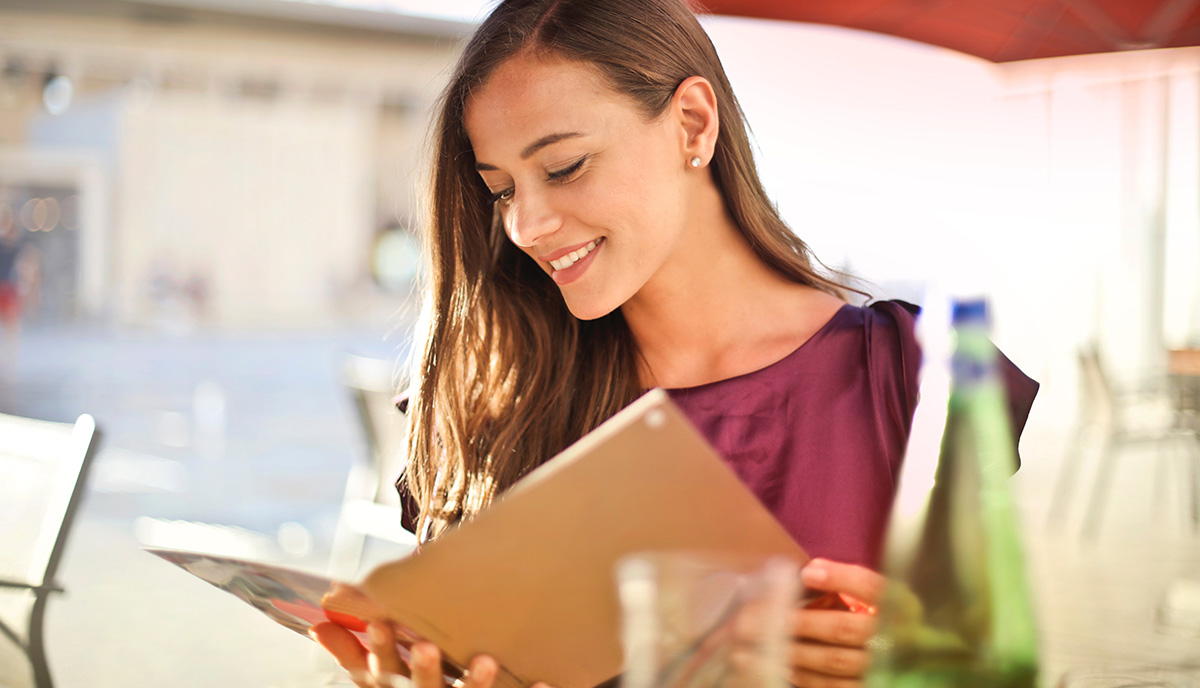 As previously discussed, French restaurants are notorious for not taking French off the menu. Perhaps it’s a part of the romantic and chic allure of going to a French restaurant, ordering some soupe d'oignon to start, a glass of cabernet sauvignon, and a boeuf bourguignon. And, why not, some crème brulée for dessert!

Frequenting your local French restaurants will not only expose you to a wonderful culinary experience but will also allow you to work on your French. Ask a staff member if they have any French-speaking staff at the restaurant. See if they’ll be able to take your order in French or at least help you correct your pronunciation.

And, even if they don’t have French-speaking staff members, you can still use this as an opportunity to practice your French pronunciation out in public.

One of the greatest things about the internet is that you can find basically anything you might need. If you’re the type of person who likes to learn languages by listening to music, then you’re in for a treat.

Here’s a fun and catchy song about the vegetables that you can use to memorize some of the most common vegetables. It also talks about vegetables that come in different colors, so it will help you master the colors in French as well.

If you’ve been to France before, especially to towns and smaller cities, you’ll know how popular open-air fruit and vegetable markets are. If you can’t physically go to a French market, you can always turn to YouTube for great tours of some of the best markets in France.

Here’s a video that will take you through the fruit and vegetable section of marché de Rungis, the largest food market in the world!

If you’ve been studying French online or in-person, you may have realized that the French love their idioms. Seemingly nonsensical phrases are scattered through everyday conversation, leaving those who don’t know the context wondering what the other person meant.

Luckily, you can learn the meaning behind many new French idioms now that you know over a hundred veggies in French. A lot of these idioms also incorporate some French slang, so if you’re unfamiliar, you might want to go check out our blog post before you proceed.

Here are some of our favorite French idioms involving vegetables.

Don’t forget to learn your veggies!

We know that learning over a hundred new words is no small potatoes. But, just the fact that you got to the end of this article shows that you are committed to the cause and will soon master saying all the vegetable names in the French language!

Using our tips and strategies will help you learn all the vegetables like a pro. And if you feel like you’ve already got a pretty good grasp on the veggies, why stop there? Check out our French language blog for even more awesome guides on all kinds of French vocabulary.

As always, get in touch with us if you have any questions about learning French and we’d be happy to help.

Thanks for reading and à bientôt !