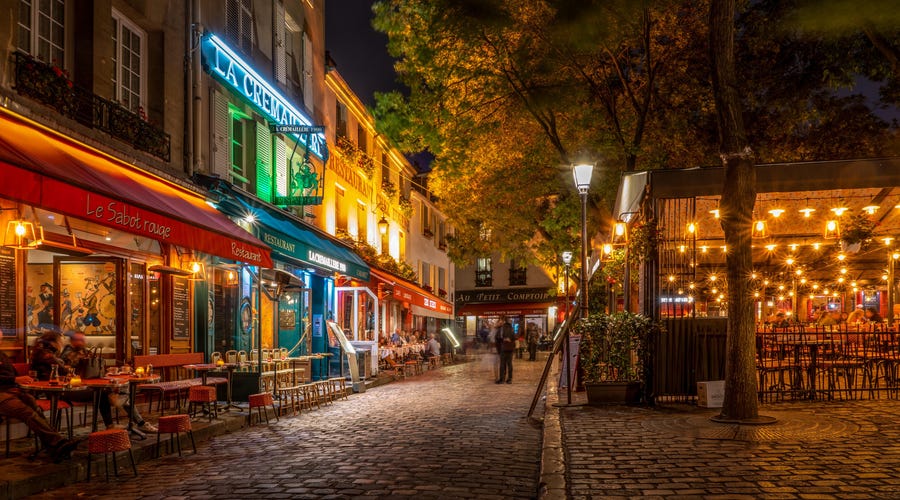 To all foodies out there: this article is for you! Let’s admit it, one of the most enjoyable aspects of learning a language and experiencing a different culture is through food.

And if you’re learning French, you’re in for a treat. Literally! From world famous French gastronomy to Swiss chocolate, without forgetting the Québécoise poutine, there are plenty of yummy ways to practice your French all over the world.

So, keep reading if you:

First things first, let’s have a look at the most common types of restaurants in France:

Ready to order? Then the vocab below will come handy! 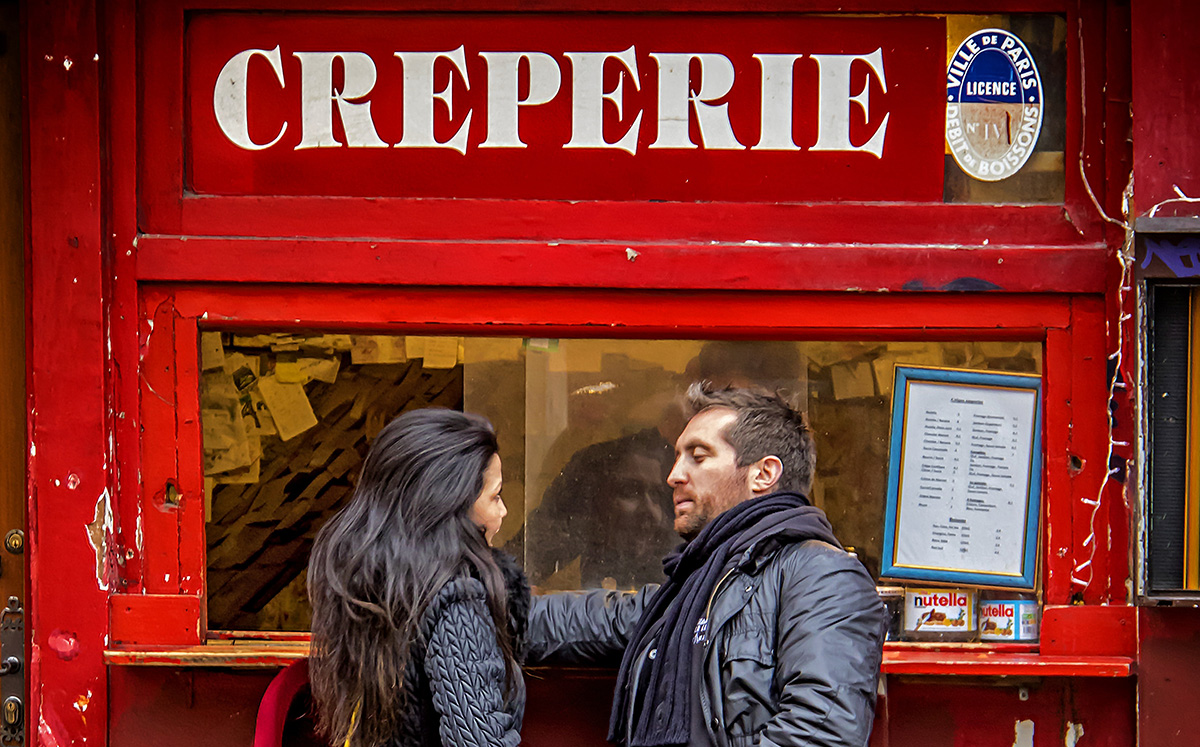 How to ask for a table in French

If you’re getting hungry, it might be time to ask for a table or make a reservation. It could also be helpful to learn numbers in French!

How to order at a restaurant in French

Now, things are about to get serious. Get ready for your next sortie au restaurant with the examples below! 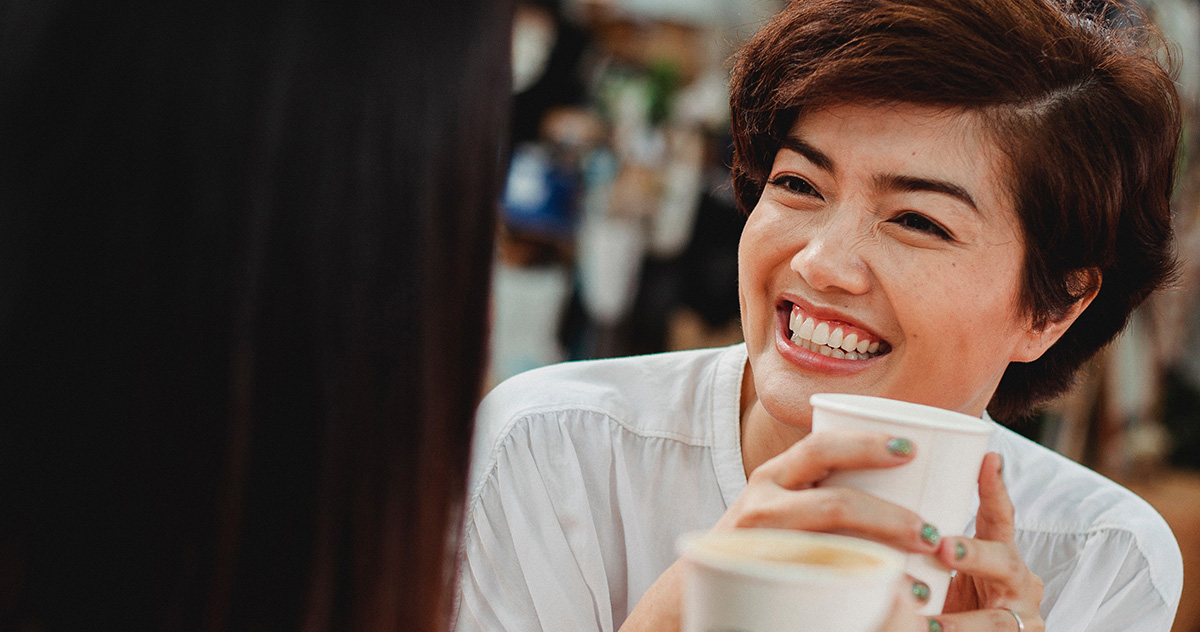 Below are a few examples of what your waiter or waitress might say at a French restaurant. 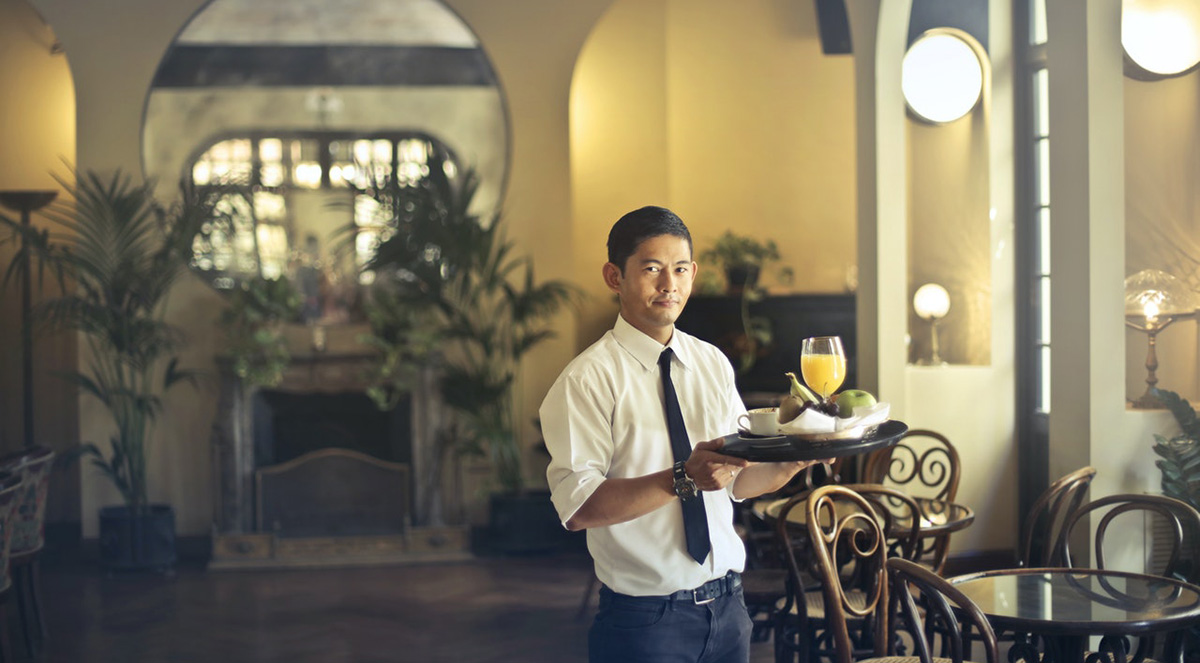 French gastronomy is very diverse, and it’s impossible to establish an exhaustive list. But the food items below should be a good start, as you’re likely to find them in most restaurants. You can broaden your food vocab — and get your vitamin fix — with our articles on vegetables in French and fruits in French.

As a French person, I can’t imagine having a meal at a restaurant without dessert. There are a trillion delicious desserts, but below are a few basic words. Yum&… 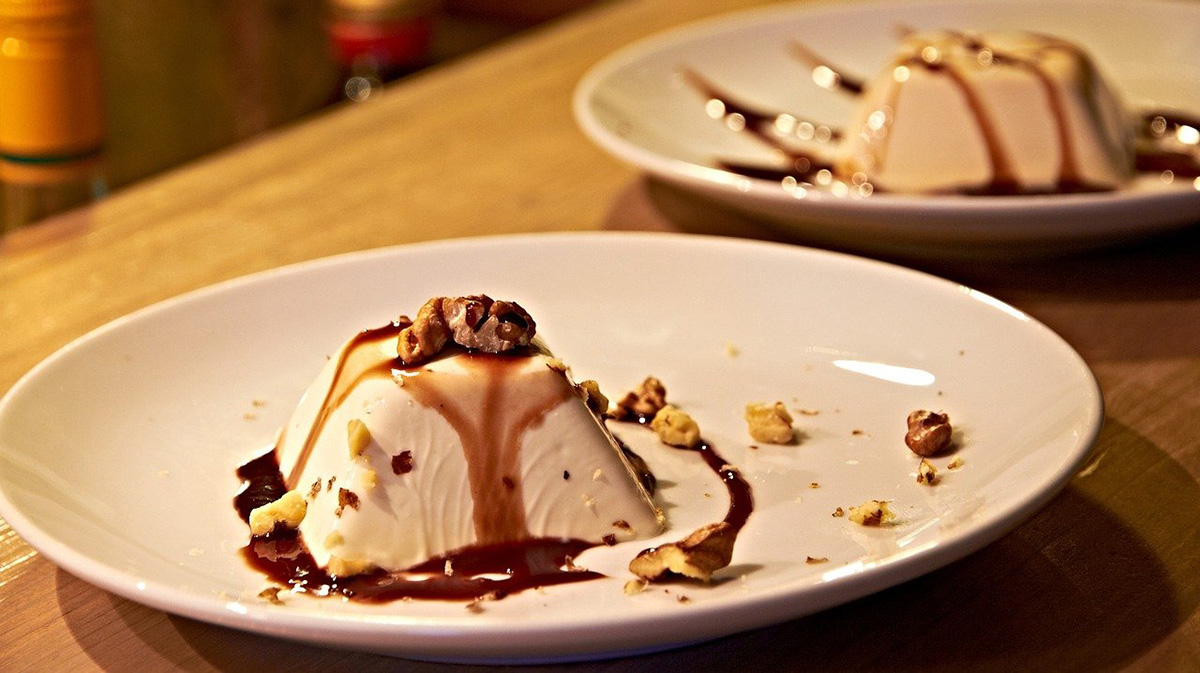 How to order tacos in French

Before you say anything… Yes, we know tacos are Mexican. However, we’re not referring to a taco but to a “tacos”. Are you lost? So was I when I went back to France for a few days and found out about this questionable ‘culinary’ trend. Don’t even get me started on my Texan fiancé’s reaction. Bon, alors c’est quoi ?

A French taco is a grilled tortilla folded around cheese, meat… and French fries. Invented in the mid-2000s in a suburb of Lyon, it has dethroned kebabs and burgers for many young people.

Disclaimer: We’re not saying it’s good, we’re just teaching you how it works.

Yep, you can even mix and match. Oh mon dieu.

How to order a baguette in French

Bread is a staple of French food, and has been the base of alimentation for centuries. In fact, there are lots of idioms around it, for example “Ça ne mange pas de pain”, which means “It doesn’t hurt”.

When in France, you should definitely visit a bakery or two (or a dozen, actually) and enjoy a crunchy baguette, a croissant or a traditional jambon-beurre. If the baguette is still warm, it’s customary to eat the tip of it — le quignon — on your way home.

Here is a little help on knowing what to ask:

Note: From the thinnest to the thickest: ficelle, flûte, baguette, pain. It’s a controversial topic depending on the region, and don’t get me started on “pain au chocolat'' and “chocolatine”!

Whatever you choose, please send us a picture of you with your baguette, a striped t-shirt and a beret. Can’t resist!

Now that you know how to order food in French, try ordering something off of our Berlitz French menu. There are lots of local specials to choose from. 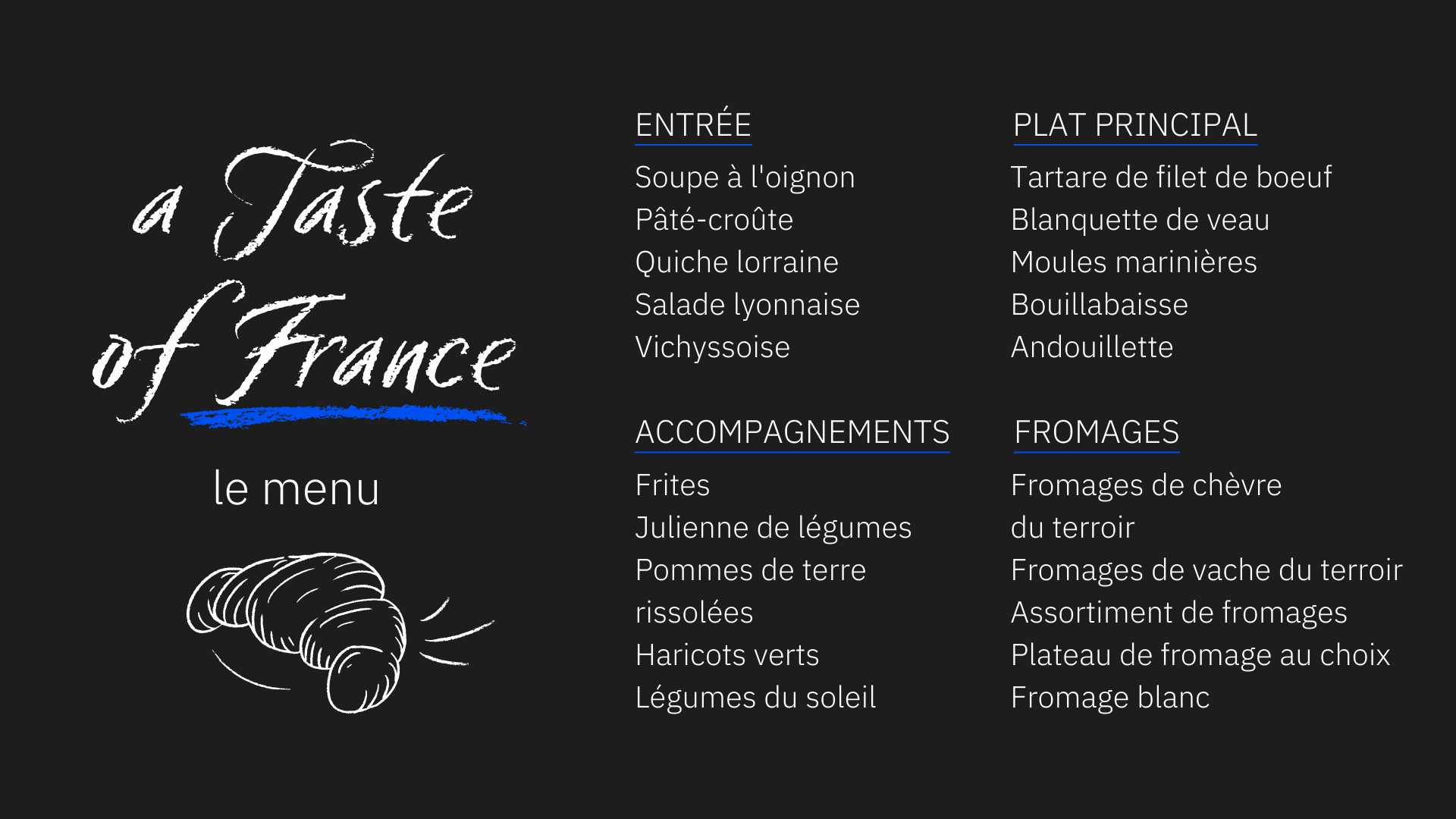 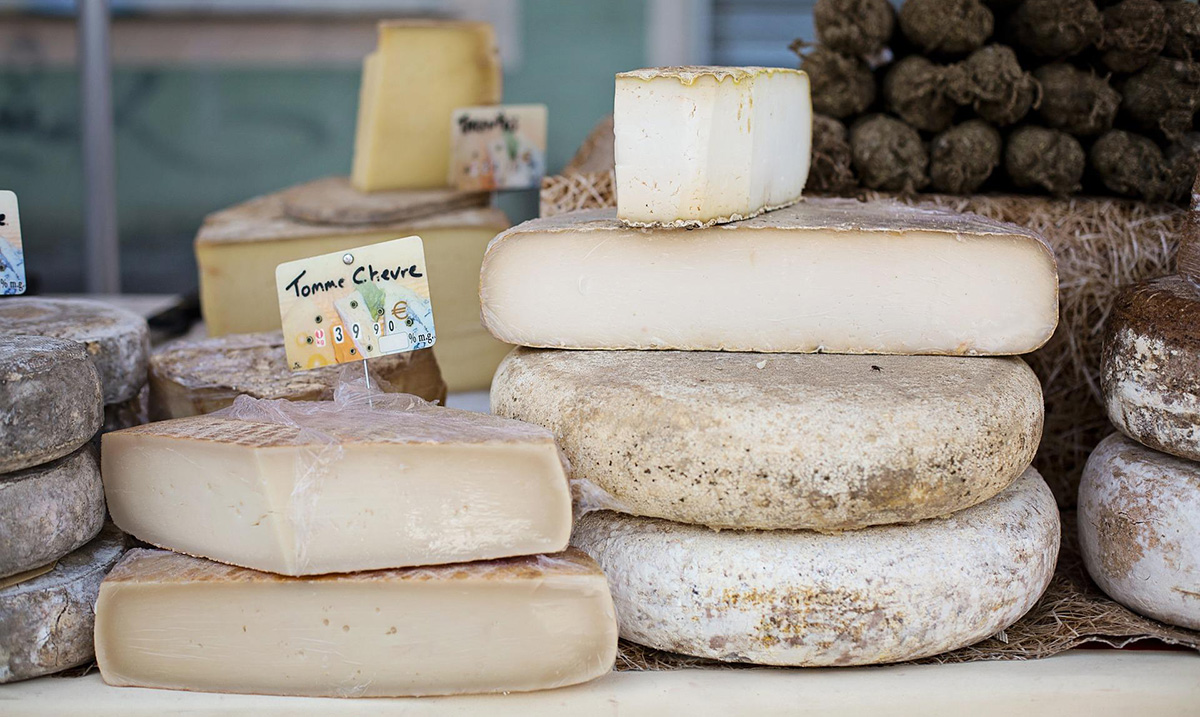 While they are slowly but surely being adopted in Europe, especially in large cities, doggy bags are not really a thing in France. In most European countries, portions are reasonable. It’s possible to finish your dish, or even an entire menu with a starter, main and dessert.

Also, Europeans tend to stay a lot longer than Americans when they eat out, and dishes typically don’t arrive as quickly. So you have time to make room for the next course! Of course, it doesn’t hurt to ask, but keep in mind that it might be a bit “off putting” in some restaurants, especially if they are on the fancy side. Instead, try to ask for a dessert to go, for example.

2. The customer is king… or not

In general, French people are a bit less accommodating than Americans when it comes to customer service. And restaurants are no exceptions. While it’s acceptable to ask for a change due to a dietary restriction, some chefs will refuse to alter their creation. Similarly, restaurants won’t always accept a change or swap in a set menu.

For me, THE best thing about my native country is cheese — I apologize if my friends and family are reading this.

While a traditional French meal will always include cheese before dessert, most modern restaurants will give you the choice between cheese and dessert in their set menu. Some don’t even offer cheese, and this used to offend my grandfather!

After all, France has over 1,200 varieties of cheese!

Some dishes are even entirely based on cheese, for example (click for the recipe):

Finally, note that many cheeses (the best, actually) are unpasteurized.

I don’t know about you, but I’m starving. So I won’t keep you much longer. Who better than our favorite rodent chef Ratatouille to conclude this extensive article on food and restaurants in French?

There is just one more thing to say. Bon appétit !

113 yummy vegetables in French to make your vocab more tasty