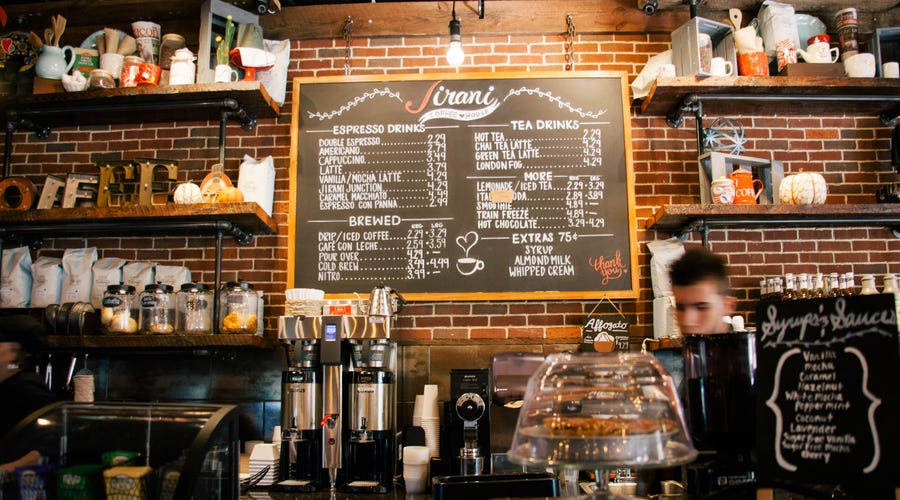 How to order 13 delicious coffees in 12 different languages

Coffee culture is pretty universal, but we want to highlight a few parts of the world known for their unique caffeinated beverages, and tell you how to order them using the local lingo.

That way, you’ll be well-prepared for your next journey abroad. First, a bit about the history and geography of coffee itself.

Where did coffee come from?

Most agree that coffee came from Ethiopia, though some claim Yemen to be the original source. In the 15th century, wild coffee plants were taken from Kefa, Ethiopia and cultivated in southern Arabia.

Some common varieties are native to other parts of the world, however, such as Latin America and Asia. As legend has it, an Arab goat herder first discovered its effects when his goat began behaving strangely after eating some coffee berries on a bush.

How did café culture develop?

While the Qur’an originally banned the consumption of coffee, it became widely adopted by Arabs, and coffeehouses began cropping up around the Middle East. By the 16th and 17th centuries, coffee had spread throughout Europe.

By the late 17th century, coffeehouses were sites of social, cultural, and political activity in Europe as well as the British colonies in the U.S. Cultivation of the plant spread from Africa and the Middle East to Indonesia and Hawaii.

How to order coffee around the world 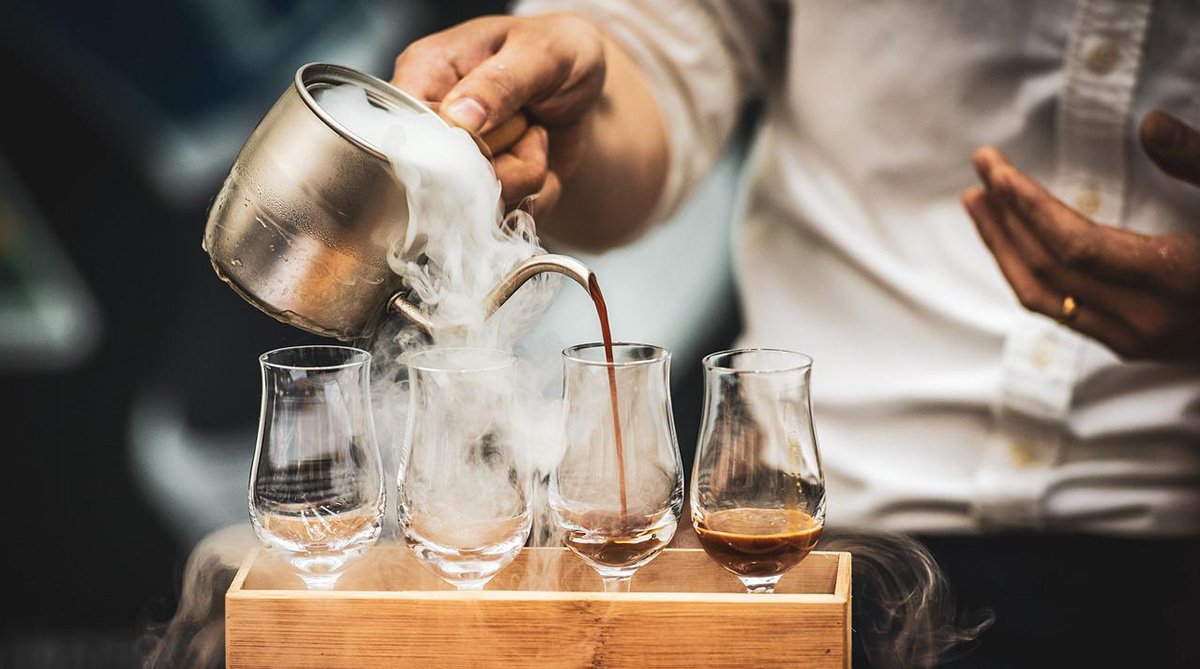 Coffee is an integral part of Turkish culture. Everywhere you go in the country, you will see locals gathering inside coffee houses, or sitting outside, often with a foamy little cup of coffee served from a long-handled copper pot called a cezve.

Known as Turkish coffee, or Türk kahvesi, this strong, frothy brew has lasted from the dawn of the Ottoman Empire to the present day.

Espresso: concentrated coffee served in small, strong shots and enjoyed at the coffee bar, standing up. 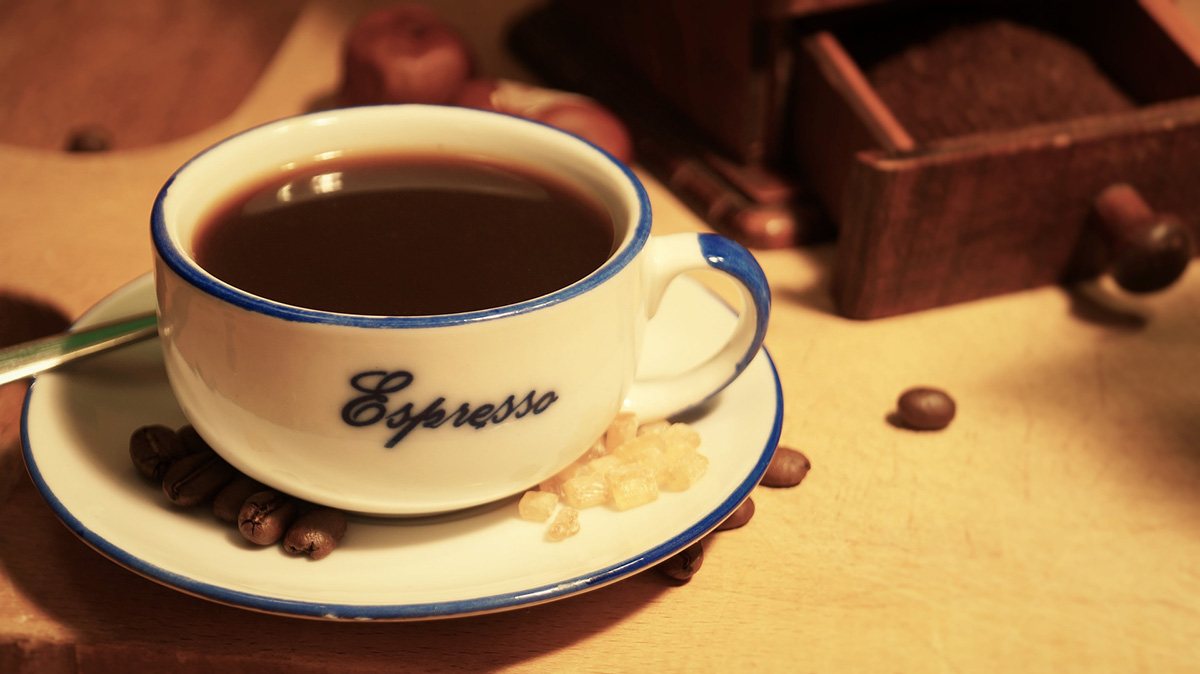 In the early 20th century, during Europe’s Industrial Revolution, an inventor from Milan patented the first espresso machine. Though espresso had technically existed in Italy, “Turkish-style,” before the 19th century, it did not fully contribute to Italian coffee culture as we know it until commercial machines were invented.

Now, espresso is the fundamental base of nearly every non-filtered coffee, from the flat white to the cappuccino.

How to order coffee in Italian: Un caffè, per favore.

Café Crème: an espresso with milk or cream and foam, similar to a cappuccino

Also called a café au lait or simply a café crème, this style of coffee is typically ordered for breakfast and paired with a croissant or baguette.

Although you may quickly become a favorite, and you’ll be tempted to order it in the afternoon or evening for a little boost of caffeine, it’s not common to do so. As in Italy, you may raise some eyebrows for ordering it after 11am.

Kan Kohi: canned coffee, either hot or cold, found in vending machines throughout the country

Canned coffee was invented in the 1960s in the name of convenience. You can now find it all over the country, including at airports and convenience stores. Note that this is in stark contrast to tea culture in Japan, which emphasizes taking one’s time.

How to order a coffee in Japanese: You don’t! These are simply self-serve at vending machines throughout Japan. If you’d like to order a coffee at a coffee shop, or kissaten, however, use this phrase: コーヒーをください (koohiii o kudasai) (“I would like to have a coffee.”)

Wiener mélange: this “Viennese mixture” is an espresso plus steamed milk, topped with foam. 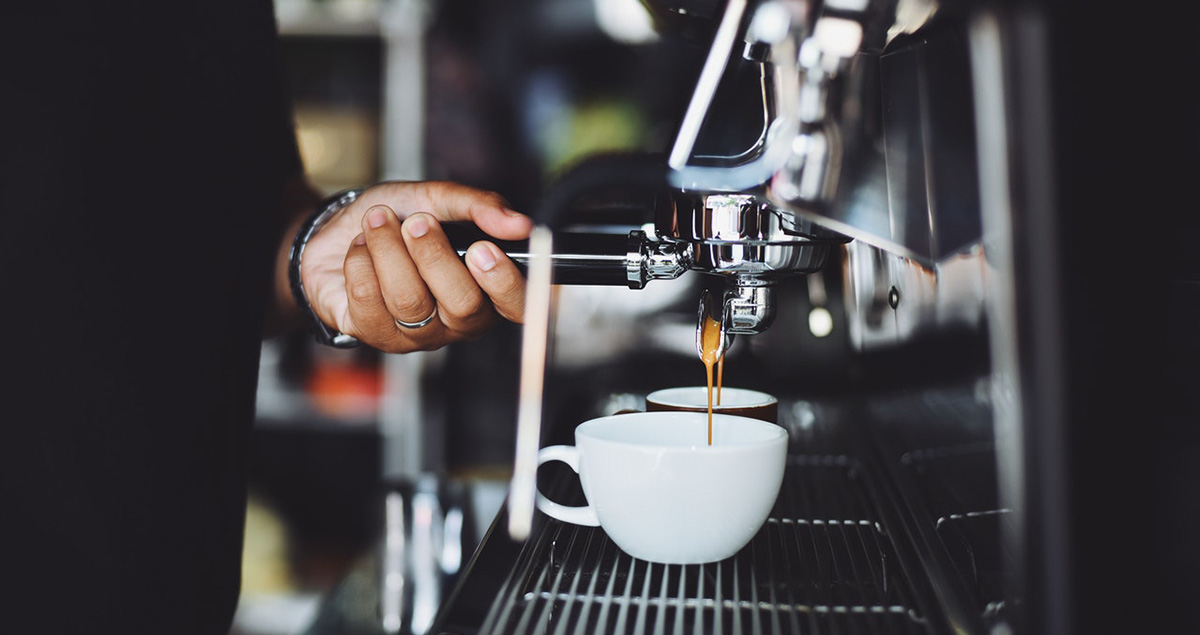 In the 19th century, Austrians began adding fine milk foam to coffee and calling it a “mélange,” as French culture was especially fashionable at the time. Now, the drink is a staple of Austrian coffee culture.

Preparing a proper Wiener mélange involves taking an extended (longer) espresso and adding foam or milk; filling up the rest with frothy blown milk; and topping it off with chocolate sprinkles, vanilla, or cinnamon.

How to order a coffee in Austria: Austrians speak French and German, so you have two options:

Buna: brewed in a terra cotta pot called a jebena over charcoal, poured into demitasse cups, and served in a ceremony with others

Although coffee comes from Kaffa, Ethiopia, the local brew is called buna or bunn. Drinking buna has been a communal practice in Ethiopia for hundreds of years, in contrast to cultures that encourage solo or duo sipping. Joining in the ceremony is part of an everyday routine for friends, family, and even strangers passing by.

How to order a coffee in Amharic: Ask for “buna” (coffee) or “buna b'Wetet” (coffee with milk). These are words in Amharic, the official language of Ethiopia.

Frappé: an iced coffee often made with instant coffee and served with sugar and evaporated milk

First introduced at the 1957 Thessaloniki International Fair, the café frappé has become a Greek classic. Dimitris Vakondios, an employee of Nestlé, modeled it after the popular chocolate children’s drink, which was produced instantly in a shaker.

Now, it’s most often made using either a cocktail shaker or a hand mixer. Choose your level of sweetness: glyko (sweet), metrio (medium), or sketo (no sugar).

Barako (“tough man” in Filipino) coffee is a staple of coffee culture in the Philippines. Simply boil water in a pot; add the kapeng barako grounds and let it boil for a few seconds; reduce the heat and add sugar or honey; and boil for up to three minutes.

How to order a coffee in Filipino: Gusto ko pong bumili ng kape. 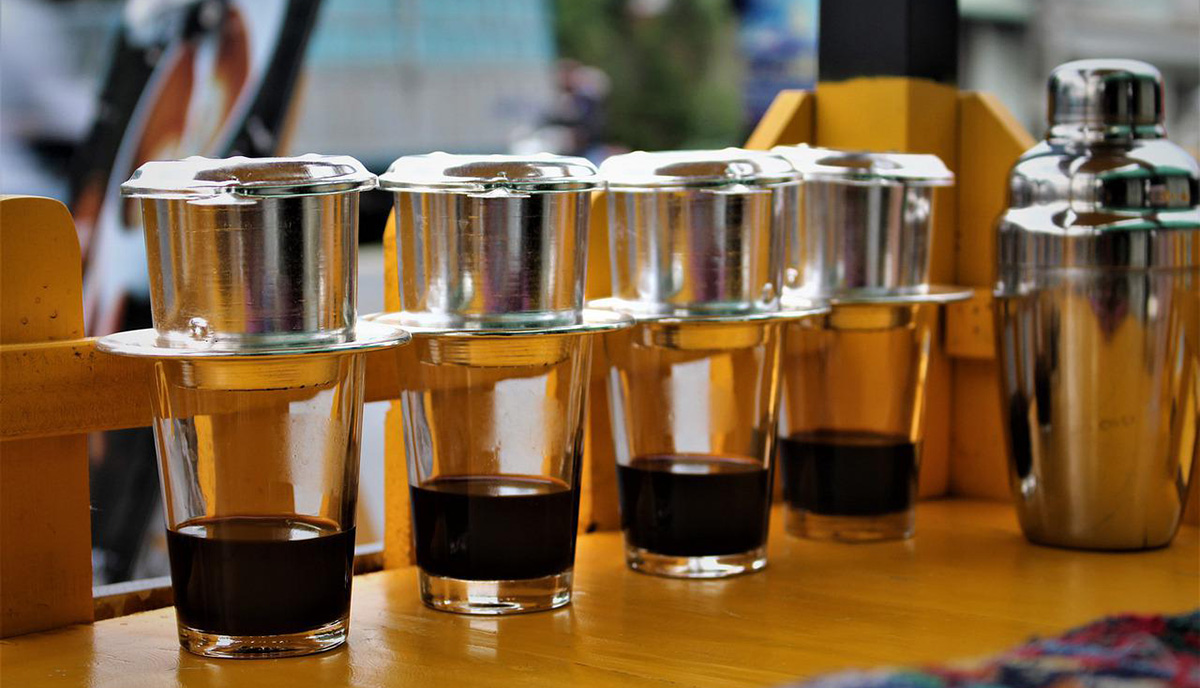 Vietnam is the second-largest coffee producer in the world, but its history with coffee is relatively recent. The French inspired the invention of the Vietnamese coffee in the 19th century. To prepare it, drip coffee is served cold and topped with sweetened condensed milk. 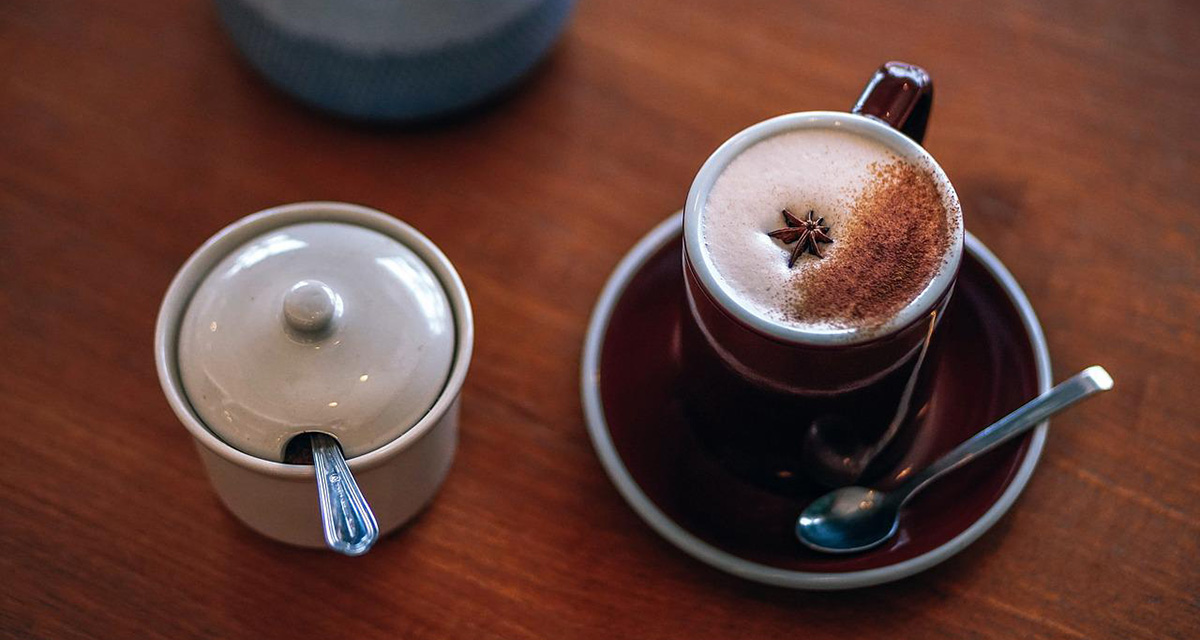 Invented during the Mexican Revolution, this warm drink has only grown in popularity and can now be found beyond the border, including at coffee shops in southern California. It’s considered by many Latinos to be a part of their family history and a bridge to the past.

How to order the coffee in Spanish: Un café de olla, por favor.

The people of Yemen gave the coffee plant the Arabic name qahwa, from which our words “coffee” and “cafe” both derive. Originally associated with the Sufi mystics, it was considered a drug used for spiritual and ritualistic purposes.

Now, you can drink qahwa in all Arab-speaking countries, including Saudi Arabia. Recently, “Arabic coffee” was renamed “Saudi coffee” in order to strengthen local culture.

By 1840, coffee was Brazil’s main export. Now, Brazil produces one third of the world’s demand. Brazil’s coffee drink of choice, cafezinho, is served everywhere, from cafe meetups to office meetings.

The key to a perfect cafezinho lies in cloth-filtering and longer roasting at high temperatures.

How to order a coffee in Portuguese: Eu gostaria um cafezinho por favor.

Containing the same amount of coffee as five to six espressos, a Cuban colada is meant to be shared with others. You can order these in Cuba or in Miami at “ventanitas,” or walk-up windows, where the barista will pour a batch into small cups to take away. The foam, or espumita, is also what makes a colada unique.

How to order it: Una colada, por favor.

The next time you find yourself ordering a coffee abroad, consider branching out from your usual go-to drink and ordering one of these cultural staples. Whether it’s a kan kohi in Japan or a Wiener mélange in Austria, you’ll be well-equipped to keep yourself caffeinated throughout the day.

Using some of the phrases from this list, you’ll not only give yourself the chance to practice the local lingo, but also to learn more about the country itself. Where there’s coffee, there’s language–and culture. What better way to add a little jolt of energy to your travels and studies?

Why the Berlitz method will work for you

How to learn a language fast online