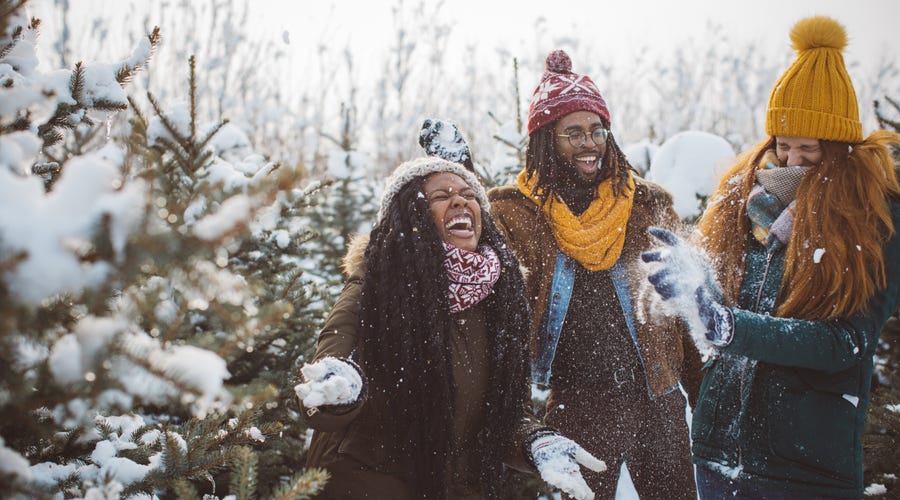 Pack your sunglasses AND your snow coat! We’re about to take you on a colorful tour through the German seasons with all its wonders - from the first spring flowers that light up Germany’s dark forests to the snowy Christmas markets in winter.

One of the most rewarding aspects of learning a language is learning about the cultures of those who speak it - and a huge aspect of people’s day to day are the seasons they go through. Some countries stay warm throughout the year and only alternate between rainy seasons and dry seasons. Some have summer from June to August, while others get to enjoy summer from December to February.

This influences the weather, the flora and fauna and how we celebrate our holidays. If you’re learning German, you might be curious what a year in the life of a German-speaker looks like. So to understand all of it a little better, we’ll walk you through the seasons of the year in German and what months of the year they fall in.

The seasons in German

In English, the word “season” has a number of different meanings, while in German each one of those meanings has its own word. If you’re talking about one of the four seasons in a year, then “Seasons” in German are “Jahreszeiten”, which literally translates to “times of the year”. This might be the most common use of the word, but there are a few more meanings:

Spring in German is “Frühling” and the beginning of spring is a big deal in countries that get as cold as the German-speaking ones. You can feel a shift in the mood. Birds start singing and people tend to have a spring in their step.

March and May are often nice and sunny, while the weather in April is notoriously unpredictable and a perfectly sunny day might suddenly change and surprise you with a snowstorm.

The big holiday in spring is Easter. This was originally a pagan fest named after the Germanic spring goddess Ēostre. Even though Christians obviously hijacked the holiday to celebrate the resurrection of Christ, most Germans went back to celebrating it in its original meaning and all the Easter traditions are about celebrating the fresh season, with eggs and rabbits representing fertility and new life.

Did you know that even the Easter Bunny is German? He was first mentioned in German folktales and introduced to America by German immigrants in the 1700s.

Spring is the season of birdsong, bunnies and fresh new starts! It’s also the time when flowers peak out of the snow - your first clue to dust off those gum boots and gardening gloves. If you’re interested in a walk through the year that focuses on flowers, check out our bloomy guide on 127 lovely flowers in German!

“Summer” in German is “Sommer” and it can get hot! Even though the temperature in Germany ranges from an average low of 59°F (15°C) and an average high of 76.°F (24°C), which sounds fairly mild, the truth is, like most of central Europe, German-speaking countries are just not prepared for hot temperatures, so ACs are extremely rare. Better learn how to fold a paper fan!

Summer fruits like strawberries and raspberries ripen and it’s a lot of fun to pick these yourself on the fields that open up through the picking season. Ice-cream, sunshine and summer sports come to mind. Every other year, the Fußball Championship is also a huge part of German summers, either the European Cup or the World Cup.

“Fall” in German is “Herbst” and it brings us some of the most beautiful color combinations: While the leaves turn yellow and red, Germans pull out their scarves and gloves and overcoats, showcasing that long-awaited fall fashion and getting in the spirit for the cold half of the year. Harvest season brings veggies like sweet potato and squash and migratory birds do the smart thing and migrate to Southern Europe and North Africa.

There’s no Thanksgiving in Germany but the sentiment is very similar: Falling leaves, pumpkin spice drinks and everyone is slowly getting into the holiday spirit!

In Germany, the holiday season officially starts in winter. This is the time to spend with your family and close friends and eat lots of good German foods.

If you’re coming for the skiing or snowboarding season, it’s best to visit between December and March. December is one of the most beautiful months to visit anyway, especially the South of Germany and Austria and Switzerland - get ready for some snowy mountains top views!

Whether you’re in the mood to get cozy by the fireplace or build a snowman outside, while humming “Oh du Fröhliche” - Germans really know how to do the Christmas season right!

How to talk about the seasons in German

Summer is what happens in your head

If most of the year is just a little colder than you’d like, you’ve gotta learn how to keep a sunny disposition despite the weather! So take it from the Germans, as the a capella band Wise Guys from Cologne sings:

Translation: “Summer is now, whether you’re sweating or freezing. Summer is what happens in your head. It’s summer, I made sure of it. Summer is laughing anyway!”

Sing along and keep in mind that winter is always followed by spring and, if nothing else, life is an endless circle of holidays. So there’s always something to look forward to! For related reading, complement your learning with days of the week in German.

And as spring is followed by summer, each one of our articles is always followed by the next one. So be sure to keep up with our German language blog!